How to Use the Hidden Camera Level Tool in iOS 11

Apple's native Camera app in iOS 11 has plenty of tools for helping you get the right shot, but some are more hidden than others. The camera level is the perfect example of a really handy tool that many users don't even know exists, mainly because it's part of a feature that's turned off by default.

If you tend to take pictures of things when standing directly over your subject, like a meal on a table or an ornament on the ground, then you'll want to use the camera level, as it helps you capture a balanced shot without having to use a tripod arm or mount. It's also useful for taking a shot of something directly above you, like an object on the ceiling or in the sky.

Subscribe to the MacRumors YouTube channel for more videos.
Here's how to enable and use it on iOS 11.


How to Enable the Camera Level on iPhone and iPad

The camera level tool is part of the Grid overlay, which is useful in itself for applying the rule of thirds in your pictures for more balanced compositions. First then, you need to turn on Grid mode. 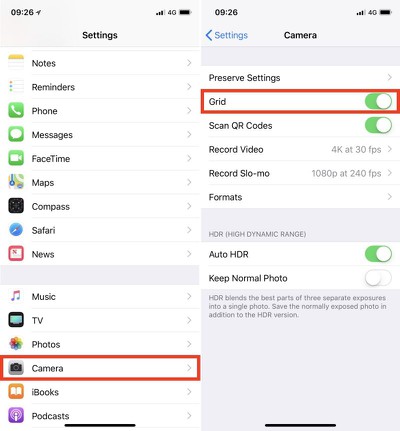 How to Use the Camera Level on iPhone and iPad

The aligned crosshairs turn yellow (right), indicating the lens is parallel with the ground.
The level tool also comes in handy when scanning documents on a desk with your phone's camera, but iOS now offers a dedicated scanning feature in the Notes app, so you'll probably want to use that instead.
29 comments

Does not work for me

It’s only when you’re pointing the camera straight down
Score: 7 Votes (Like | Disagree)

It’s only when you’re pointing the camera straight down

Well, that's..... useful for taking downward pictures... Would have loved the level to be available in regular shots so I can level the camera to keep the horizon level in my landscape shots.
Score: 6 Votes (Like | Disagree)

UberTiger
This really highlights how poorly designed some of the Apple apps are that you have to leave the app and dig into a submenu of the completely seperate settings app to toggle features like this.

It’s mad that you also have to go to this page to change the camera recording quality.
Score: 4 Votes (Like | Disagree)

mtneer
Thank you for pointing this out.
Score: 4 Votes (Like | Disagree)

tomtendo
Does not work for me
Score: 4 Votes (Like | Disagree)

Not with my iPhone 7 either

Edit: I posted before reading others’ comments, it does work, but it doesn’t make much sense if it will only work facing down. How often do people actually take photos in that manner?

More than you think...

Tuesday January 26, 2021 6:14 am PST by Joe Rossignol
Apple today announced that it will be celebrating Black History Month with curated content that highlights and amplifies Black creators, artists, developers, and businesses across the App Store, Apple Music, the Apple TV app, Apple Books, Apple Podcasts, and more. The content will be featured throughout the month of February. Black Unity Sport Band has "Truth. Power. Solidarity." ...
Read Full Article • 129 comments

Tuesday January 26, 2021 10:03 am PST by Juli Clover
Apple today released watchOS 7.3, the third major update to the watchOS 7 operating system that was released in September. watchOS 7.3 comes more than a month after watchOS 7.2, an update that brought support for Apple Fitness+ ‌‌The watchOS 7.3 update‌‌ can be downloaded for free through the dedicated Apple Watch app on the iPhone by going to General > Software Update. To install...
Read Full Article • 47 comments