On the iPhone and the Apple TV, Fitness+ is installed automatically when upgrading to iOS 14.3 and tvOS 14.3, but that's not the case on the iPad. 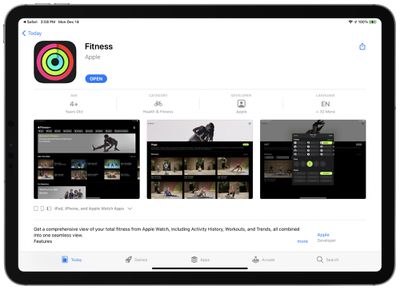 If you want to use Fitness+ on an iPad, you need to manually download the app from the App Store.

It's not clear why Apple didn't just add the Fitness+ app to the iPad when updating to iPadOS 14.3, but it's as simple as any other app to download. Just look it up in the App Store or click the link up above to access it, and then tap on "Get."

When Fitness+ was first released, the iPad app was nonfunctional and wasn't available to be downloaded, but Apple has now fixed that problem and everyone should be able to download it from the App Store.

For more on Fitness+, make sure to check out our full Fitness+ guide.

Rogifan
So the app is called Fitness, has the exact same logo as the iPhone app but only includes Fitness+. It doesn’t include the Summary tab like the iPhone app which includes all your workout information & activity rings. ??‍♀️
Score: 8 Votes (Like | Disagree)

spencecb
This is so strange. I still can’t find the app when searching in the App Store. I can only when following the link in this article.
Score: 6 Votes (Like | Disagree)

Why in the world Apple can I not see my workouts from the fitness app on my iPad. There is so much data there that I would love to see on a nice big screen instead of threw a phone. Sometimes, for a multi billion dollar company known for its ecosystem, they make NO sense.

BuffyzDead
iPad 5th Generation (2015 model). iOS 14.3
I see the app but it won't give me the download option, stating:

This app requires specific features not available on this device
Score: 4 Votes (Like | Disagree)

I bet there is an issue with anti trust...bundling all this content with the ios may lend themselves to challenges from other fitness apps? So, that is why needs to be done separately?

Then why is it bundled in Apple TV and iPhone?
Score: 3 Votes (Like | Disagree)

How to Reset Beats Fit Pro

Monday November 15, 2021 6:18 pm PST by Tim Hardwick
Apple's Beats-branded Beats Fit Pro have a useful reset function that returns them to their factory settings. This can come in handy if you're handing down the wireless earbuds to someone else or you're having any sort of problem with them. How to Reset Beats Fit Pro Place both earbuds in the charging case and leave the case open. Press and hold the system button inside the case for 15...
Read Full Article

Thursday September 29, 2022 7:26 am PDT by Sami Fathi
Speaking at Università Degli Studi di Napoli Federico II in Naples, Italy, Apple CEO Tim Cook said that not too long from today, people will wonder how they led a life without augmented reality, stressing the "profound" impact it will have on the not so distant future. At the university, Cook was awarded an Honorary Degree in Innovation and International Management and also sat down for a...
Read Full Article • 361 comments