Apple's AirTags have a built-in safety feature that's designed to prevent them from being used to track you, so no one can plant an AirTag in your items and then monitor your location without your awareness. 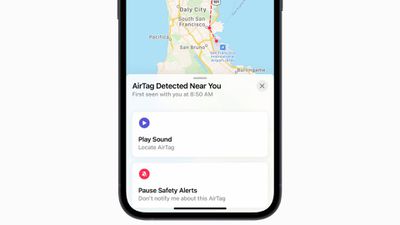 If there is an AirTag that does not belong to you near you for an extended period of time, your Apple device will alert you with the following notification: "AirTag Found Moving With You."

When you see an "AirTag Found Moving With You" message, it means that the owner of the AirTag may be able to see the location of the AirTag on their Apple devices, and by proxy, your location. It's important to address any alerts you receive right away for this reason.

In general, you will receive an alert about an unknown AirTag when you move from one location to another, such as traveling home or to another place that you frequent, as long as the AirTag remains in your possession.

Apple says that if you receive this alert and can't find the AirTag, it might not be with you anymore, but there are privacy features that might mask an AirTag if you attempt to play a sound using an old notification.

All ‌AirTags‌ have a Bluetooth identifier associated with them, but this identifier is designed to change regularly. If you had an AirTag with you overnight, for example, by the time you notice the notification in the morning, the identifier might have changed and you won't be able to make it play a sound for location purposes.

In this situation, Apple recommends looking through all of your belongings to make sure the AirTag isn't there, or waiting to see if another alert appears as you move from location to location during the day.

You should also be aware that after three days away from its owner, an AirTag will begin regularly emitting a sound, which is another anti-tracking function. If you have an AirTag with you, you may continually hear the noise from the AirTag, preventing it from remaining hidden.