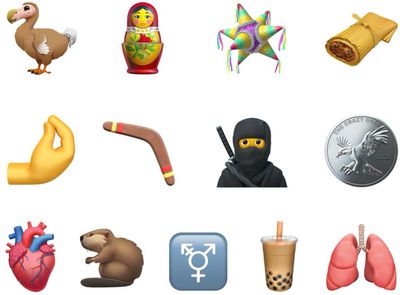 The update also features 55 gender and skin-tone variants, along with new gender-inclusive emojis that can be used as an alternative to gendered versions, such as person with veil and person with tuxedo rather than the current woman/man options.

As noted by Emojipedia, Apple previewed a handful of these emojis in July, but many of the new characters are being seen in their official form in the new beta.

After the Emoji 13 update, there will be a delay with Emoji 14 that will prevent the new emojis from being introduced in 2021. Emoji 14 will be released six months late, which means it likely won't be able to be added to smartphones until 2022. There is a stop-gap Emoji 13.1 update planned for 2021, but it mostly focuses on skin tone variations and only introduces a few new emoji that include face exhaling, face with spiral eyes, face in clouds, heart on fire, and mending heart.

What to Expect From Apple's Upcoming 2022 iPhone SE 5G

Friday February 4, 2022 2:08 pm PST by Juli Clover
Update: 📢 New iPhone SE has been announced.📢 👀 Read the details. We will update this guide to reflect the release information shortly. Apple is working on an updated version of its most affordable iPhone, and the new 2022 version of the iPhone SE could be coming out within a matter of weeks. While not the most exciting refresh, there are some features that are going to be great at the...
Read Full Article • 140 comments

Wednesday February 16, 2022 1:55 pm PST by Juli Clover
Apple is working on a next-generation version of the iPad Pro, and while there are no major design updates that we know of, there are some new features that are worth looking forward to. This guide aggregates everything that we know about the 2022 iPad Pro so far based on the rumors that we've heard. Mini-LED Display Apple last year introduced an updated 12.9-inch iPad Pro with mini-LED...
Read Full Article • 220 comments

Thursday February 10, 2022 1:26 pm PST by Tim Hardwick
In iOS 15.4 and macOS Monterey 12.3, Apple introduced Universal Control, a feature designed to allow you to control multiple Macs and iPads with a single trackpad/mouse and keyboard. This article offers solutions to the most common problems encountered when getting Universal Control to work. With Universal Control, you can use your main Mac's trackpad and keyboard to control additional Macs...
Read Full Article • 62 comments