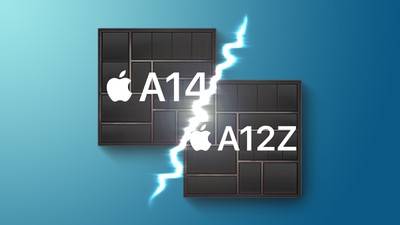 These processors are among the most powerful Apple-designed chips to date, but how do they compare? Our guide takes a closer look at each of the chips and lays out where each one excels.

The 2020 ‌iPad Pro‌ is the only Apple device to contain the A12Z, which was an iteration on the 2018 ‌iPad Pro‌'s A12X chip. Both the A12Z and A12X are variants of the original A12 chip, which has been included in the iPhone XS and ‌iPhone XS‌ Max, third-generation ‌iPad Air‌, fifth-generation iPad mini, and eighth-generation iPad.

The A12 is a processor with six CPU cores and four GPU cores. The A12X is simply a variant of the A12 with an eight-core CPU and seven active GPU cores.

The A12Z is effectively the same chip as the A12X, but with one extra active GPU core, resulting in an eight-core CPU and a matching eight-core GPU. The chip was a minor upgrade on the previous processor, and only sees tangible performance improvements in graphics-based tasks.

Nonetheless, the A12Z is the frontman of the A12 family, and performs quite differently from the latest A14 Bionic chip.

Comparing the A12Z Bionic and the A14 Bionic

Although both processors are custom Apple-designed 64-bit SoCs, there are a large number of key differences between the chips when it comes to specifications.

Read on for a closer look at each of these aspects, and see exactly how the two chips compare in practice.

The A14 has a higher frequency than the A12Z, achieving speeds of 1.8 GHz instead of the A12Z's 1.59 GHz. The A12Z can also turbo boost up to 2.49 GHz, while the A14 can turbo boost up to 3.01 GHz. This means that the A14 can run a fair amount faster than the A12Z, but since this is a maximum clock speed, both chips will not always reach these speeds in day-to-day use.

Despite having a lower frequency, the A12Z has two more CPU cores than the A14, allowing it to share load across cores and perform better in multi-core tasks.

The A12Z has double the number of GPU cores than the A14, with a total of eight. This affords the A12Z a considerable advantage in graphics-based tasks. Nevertheless, the A14's four graphics cores perform surprisingly well against the A12Z.

The A12Z is manufactured using an older seven-nanometer process. On the other hand, the A14 is the first commercial chip to be manufactured using a five-nanometer fabrication process. This is largely a consequence of the chip being two generations newer than the A12Z, and it allows the chip to be more densely packed with 11.8 billion transistors. By comparison, 2019's A13 had 8.5 billion transistors.

Although Apple says that the A12Z sees "an enhanced thermal architecture and tuned performance controllers," the A14 is clearly the more advanced chip.

The specifications of each chip mostly lead to expected behavior when benchmarking, with the chips' respective advantages helping them to pull ahead in certain areas.

The A14 performs around 30 percent better than the A12Z for single-core tasks. The higher 1.8 GHz clock speed and 3.01 GHz boost capability of the A14 allows it to perform much better here.

The leap in single-core performance demonstrates how Apple has improved the power of the chip over the course of two generations. However, it is important to remember that in single-core, the A12Z cannot take advantage of its extra cores.

In multi-core, the additional two cores of the A12Z allow it to edge ahead of the A14 by about 15 percent, despite it being an older chip.

Although the A14's individual cores are more powerful than the A12Z, the chip can perform better overall when it can use its extra cores.

It is also of note that the fourth-generation ‌iPad Air‌ performs slightly better than the ‌iPhone 12‌ and ‌iPhone 12 Pro‌. Although all three devices contain an A14 Bionic chip, it is likely that fewer thermal and power constraints allow the chip to perform slightly better in the ‌iPad Air‌.

The Geekbench 5 Metal score indicates graphics performance. With double the number of GPU cores, it is unsurprising that the ‌iPad Pro‌ with the A12Z surpasses the ‌iPhone 12‌ and ‌iPhone 12 Pro‌ with the A14 by about 20 percent.

Likewise, the ‌iPad Air‌ 4 exceeds the performance of the ‌iPad Pro‌. Since the ‌iPad Pro‌ has double the number of GPU cores, why the ‌iPad Air‌ exceeds it is unclear. One would expect that having twice as many GPU cores in the A12Z would more than make up for the per-core improvements of the A14.

To some extent, the surprising performance of the ‌iPad Air‌ may be put down to better thermals and fewer limitations on power consumption, though it seems unlikely that the large disparity could be caused by this alone. There may be software limits imposed on the A14 in the ‌iPhone 12‌ and ‌iPhone 12 Pro‌ that limit GPU performance, perhaps due to thermal concerns or to improve battery life, but the definite reason is not yet known.

Overall, the A14 is clearly the better chip with regards to single-core capability. It is also important to bear in mind the iterative improvements that have occured over the last two chip generations and the advantages of the five-nanometer fabrication process. The A14 is perhaps the better all-rounder for this reason.

For intense computational operations and multi-core tasks, the A12Z is the better chip, even though it is older and slower. More cores allow the A12Z to outshine the A14 when it is able to use them.

For the ‌iPad Pro‌'s target market, a chip with better multi-core performance makes sense. With a large display on a "pro" device, users are more likely to expect to be able to perform complex multitasking, making use of the ‌iPad Pro‌'s eight cores.

On the other hand, for the iPhone, where single-core is likely to be more important, mostly using one application at a time, the A14 is the more fitting chip.

For graphics-based tasks, due to the seemingly anomalous performance of the ‌iPad Air‌, the case is less clear. The ‌iPad Pro‌ should perform better in theory since it has twice the number of GPU cores, yet in benchmarks the ‌iPad Air‌ pulls ahead. For workflows dependent on a significant amount of graphical capability such as editing 4K video, or simply gaming, the ‌iPad Air‌ appears to be the better choice.

Monday February 22, 2021 8:52 pm PST by Joe Rossignol
Apple plans to release two new MacBook Pro models equipped with an HDMI port and SD card reader in the second half of 2021, according to analyst Ming-Chi Kuo, who outlined his expectations in a research note obtained by MacRumors. The return of an SD card reader was first reported by Bloomberg's Mark Gurman last month. "We predict that Apple's two new MacBook Pro models in 2H21 will have...
Read Full Article • 432 comments

Tuesday February 23, 2021 7:07 am PST by Hartley Charlton
Over the past week, some M1 Mac users have been reporting alarming SSD health readings, suggesting that these devices are writing extraordinary amounts of data to their drives (via iMore). Across Twitter and the MacRumors forums, users are reporting that M1 Macs are experiencing extremely high drive writes over a short space of time. In what appear to be the most severe cases, M1 Macs are sai...
Read Full Article • 572 comments

Wednesday February 24, 2021 7:26 am PST by Hartley Charlton
Hit-and-miss leaker Jon Prosser has today alleged that the upcoming 2021 iMac models will offer five color options, mirroring the colors of the fourth-generation iPad Air, and revealed a number of additional details about the Mac Pro with Apple Silicon. In a new video on YouTube channel FrontPageTech, Prosser explained that the redesigned iMacs will come featuring options for Silver, Space ...
Read Full Article • 245 comments