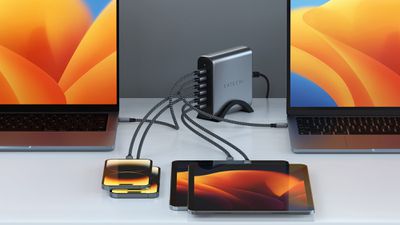 According to Satechi, the 200W 6-Port PD GaN Charger is its most powerful charger to date, offering two USB-C PD 3.1 ports and four USB-C PD 3.0 ports, charging up to six devices at the same time. With power distribution management, the power provided to each port changes depending on the number of devices plugged in.

The PD 3.1 ports can provide up to 140W of power, suitable for Apple's largest 16-inch MacBook Pro model, but the power will vary based on what's being charged.

Satechi's Thunderbolt 4 Slim Hub offers three Thunderbolt 4 downstream ports for daisychaining up to six Thunderbolt devices, along with a USB-A port and an upstream Thunderbolt 4 port that supports charging at up to 60W for connected devices.

The hub is designed for Thunderbolt 3 and Thunderbolt 4 Macs that run macOS 11 and later, and it is able to support two 4K displays at 60Hz, one 8K display at 30Hz, or one 6K display on M1 and M2 Macs. It ships with a 100W power supply, which Satechi says will provide optimal power efficiency and distribution.

The 200W 6-Port PD GaN Charger can be preordered from the Satechi website for $150, though there is a 20 percent "CES20" discount code available. It will begin shipping in the second quarter of 2023.

The Thunderbolt 4 Slim Hub is available now for $200.

Morgenland
I'm increasingly concerned that CES 2023 may consist largely of American importers of Chinese gimmick manufacturers with huge profit margins trying to bring such gimmicks to the U.S. market and, at best, develop new cases and ultimately their own branding.

Some colleagues of mine think that it would be good for America to go back to developing things on its own. As a European, I absolutely share this view.

dragoon2745
For what it's worth, to charge the 16 inch MacBook Pro at 140W you still have to use the MagSafe connector because the other ports don't support PD 3.1.
Score: 2 Votes (Like | Disagree)

For what it's worth, to charge the 16 inch MacBook Pro at 140W you still have to use the MagSafe connector because the other ports don't support PD 3.1.

Plugging the cable into this device vs. the white wall brick is still an improvement, IMO.

If you deliver power to multiple TB4 ports concurrently, can you reach 140W total, or does only one port function for charging at a time?
Score: 2 Votes (Like | Disagree)

svish
Seems to be good. Satechi products are good.
Score: 1 Votes (Like | Disagree)

I guess this would be good if you are working with some other people in very close proximity who need laptops, iPads and iPhones charged?

Between the wife and I we have two iPad pros, two iPhones, two Apple Watches, two Kindles, and my earbuds. (Hers are an older USB A to micro usb).

That’s nine USB C devices. It will make a nice charging station for us.

Someone finally got it right by leaving off the out dated USB A.
Score: 1 Votes (Like | Disagree)
Read All Comments