Apple today announced that kickboxing is coming to Apple Fitness+ as a new total-body cardio workout type alongside a brand-new Sleep meditation theme, new Artist Spotlights, the fifth season of Time to Walk, and more. 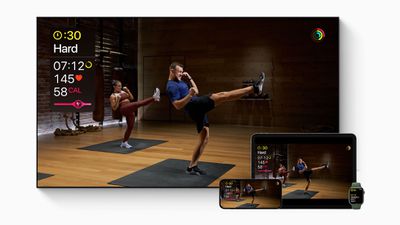 Apple says that kickboxing workouts can help to build full-body fitness, strength, stamina, coordination, and balance. Each workout will involve a distinct round of moves followed by a final round that combines the previous moves. No equipment is required, and workouts will be 10, 20, or 30 minutes long. It will be led by Jamie-Ray Hartshorne and Nez Dally – a new trainer joining the Fitness+ team. Kickboxing will launch on the platform starting on Monday, January 9.

Fitness+ will also launch two new workout Collections, including "6 Weeks to Restart Your Fitness" and "Level Up Your Core Training," on January 9 and January 23. Other than Nez Dally, two other new trainers are also set to join the Fitness+ team, with Brian Cochrane for HIIT and Jenn Lau for Strength.

Sleep joins the nine other themes in the Apple Fitness+ Meditation library, helping users to wind down before bed and drift off to sleep. Users are encouraged to begin with the Introduction to Meditations for Sleep program. New sleep meditations will be added every week.

Artist Spotlight, which dedicates an entire workout playlist to a single artist, will offer seven new workouts featuring Beyoncé and songs from her latest album, "RENAISSANCE." Artist Spotlights on the Foo Fighters will be available from January 16, followed by a spotlight on Bad Bunny from January 23.

Apple Knowledge Navigator
When I type "As per my last email" at work, this is what I really mean.

MLVC
Still no Fitness+ in my country (The Netherlands). It's a bloody shame really, just release the English app here already.
Score: 7 Votes (Like | Disagree)

Edwiser
I would love to see an integration with Apple Maps for indoor running and cycling. Being able to use street view to run on actual view of the roads on your TV.
Score: 5 Votes (Like | Disagree)

Cheesehead Dave
I was always worried about putting my Wii remote through my TV. Now I've got to be careful of my feet.
Score: 5 Votes (Like | Disagree)

Octavius8
The HIIT classes have no levels of intensity. They supose that you already have a super good physical condition and you ca jump like crazy at home all the time.
I would love to have “low impact high intensity” trainings as many YouTube channels provide.
Also there are no body weight trainings!, that is super necessary. I really don’t recommend Apple fitness in general for those reasons.

jjudson
My wife and I took a look at Apple Fitness+ yesterday to see if we would like it.

Where the heck did they find the trainers for this thing? They come across with strange personalities I would more likely associate with Heaven's Gate, Scientology, or NXIVM. I had this creepy feeling after watching a couple of their videos that I should give up all my money to the cult and live on their commune until the spaceship came.

It took half a bottle of bourbon last night to wash the vision from my mind.

But yet...
Score: 4 Votes (Like | Disagree)
Read All Comments