Apple-1 Computer Hand-Numbered by Steve Jobs Sells for Over $440,000 at Auction

A fully functional Apple-1 computer that was hand-numbered by Apple co-founder Steve Jobs sold for $442,118 at auction this month, exceeding the estimate $375,000 price tag. 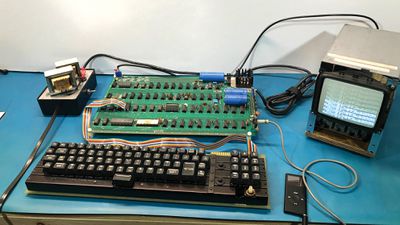 Just 200 Apple-1 computers were produced by Steve Jobs and Steve Wozniak back in 1976, and it is believed that only 60 to 70 remain, making the machines the ultimate collector's item for Apple fans. The #78 Apple-1 that was sold was in working condition, restored to a working state in 2018 by Apple expert Corey Cohen.

It was accompanied by a letter of authenticity confirming Steve Jobs' handwriting on the board, plus it came with the original Apple Cassette Interface, original operation manual, a surplus ASCII keyboard from the same time period, and an open frame Sanyo 4205 monitor.

Apple-1 computers have sold for up to $815,000 in the past, depending on the history of the machine and the condition. The most expensive Apple-1 that we have seen sold to date was the "Celebration" Apple-1, which features a blank green PCB board that was not sold to the public and was not part of a known production run.

macsplusmacs
$442K huh, well it will be worth more in 10 years than that company someone just paid $44 billion for that's for sure.
Score: 14 Votes (Like | Disagree)

They have one in the science and technology museum in London

They have one in the Powerhouse museum in Sydney, Australia. Noticed when I was in there a couple of months back.

mectojic
I still don't get the hype for the Apple 1. You can't do much with them these days. Collector's item sure, but I prefer tech that people can still use and enjoy.
Score: 6 Votes (Like | Disagree)

bsbeamer
Is this the one Rick from Pawn Stars passed on for $500k?
Score: 4 Votes (Like | Disagree)
Read All Comments