Subscribe to the MacRumors YouTube channel for more videos.
The overhauled experience, which started to be noticed by ‌Apple Music‌ subcribers on Twitter earlier today, puts the new highlight reel feature at the forefront of the Replay webpage, which users are encouraged to interact with before delving into more detailed information and expanded listening insights.

The highlight reel presents a series of social media-style animated cards that show musical highlights from the past year based on your listening history. Relevant music plays in the background for each card. The highlight reel is viewable on desktop browsers, but it appears to be primarily designed for mobile displays. 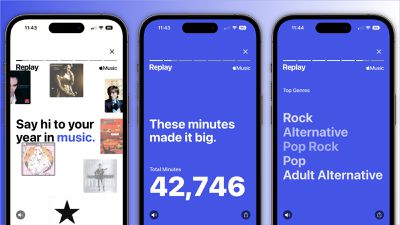 After the highlight reel, users can scroll down to see featured sections with more informative breakdowns of their top albums and playlists from the past year. Users can add their ‌Apple Music‌ Replay 2022 playlist to the Music app at the bottom of the page.

The move brings the experience somewhat closer to Spotify Wrapped, but ‌Apple Music‌ Replay remains a web browser only experience. The Music app itself can only show and play a basic playlist of your top songs for the year, ranked by most played, once it has been added via the Replay webpage.

To view your 2022 ‌Apple Music‌ Replay experience and try out the new highlight reel, visit replay.music.apple.com.

asterizk
Cool, but it's a bit weird that they aren't properly integrating this information into either the iOS or macOS apps... makes it feel tacked on, which doesn't feel great. Still, I'd rather have the info than not!
Score: 24 Votes (Like | Disagree)

madmin
Ridiculous that they ignore your own music library and only include your Apple Music history.
Score: 18 Votes (Like | Disagree)

But less of an after thought than the previous effort!
Score: 9 Votes (Like | Disagree)

ErikGrim
Every year needs an anthem:

Yay for including sleep music once again :/

Also, how is it possible I played this album 1620 times? Even if I played it every night (which I most certainly didn't), that's still only 333 nights so far this year. The album is 8 hours long!

Ah, I see you're new to Apple Music

No, since the beginning, but not lowering my standards.

idrewuk
Overall, really impressed with it — a huge step up from previous efforts. Data seems spot on, and every highlight is shareable to social, or to save as a photo.

The main issue is, why can’t this be integrated to the Music app? Many people will miss out on it because of this. Feels more and more like the whole architecture of the Music app needs to be rebuilt from the ground up.