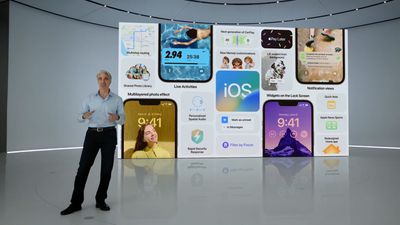 In an email exchange with MacRumors reader Kieran, Federighi responded to a complaint that Apple’s beta program doesn’t effectively listen to user feedback and suggestions, noting the challenge Apple faces when "literally millions of people participate in our betas, and many, many, many of them want to provide feedback to help influence Apple's products."

When users enroll in Apple's beta program, they're given a device profile that allows them to download early versions of Apple's next operating system, such as iOS 16 and macOS Ventura. Beta testing happens all year round but is most prominent following WWDC in June, where new versions of Apple's operating systems are shown before they're released to the general public in the fall. During the summer, beta testers test the software, finding and reporting bugs, suggestions, and general comments about the new updates.

To provide feedback to Apple, users can use the Feedback app and fill in information about the bug they're experiencing or a suggestion. Often, however, beta users' feedback goes unanswered by Apple. "I agree that the current approach isn't giving many in the community what they'd like in terms of interaction and influence," Federighi admits. "We haven't yet figured out how to achieve that in a practical and constructive way. We'll keep thinking," he continued.

Apple has in the past responded quite drastically to feedback from beta users over changes and new features in iOS, iPadOS, and macOS, but only after widespread criticism and coverage.

For example, last year, Apple turned around a design change for Safari on macOS Monterey following widespread user complaints, allowing users to choose between the design it had promised that was more refined and easier to use and the older tab bar design. More recently, Apple also responded to heavy criticism regarding Stage Manager on iPadoS 16 by delaying iPadOS 16's release entirely and key new features until later this year.

While it's unclear what Apple will do to address the ineffectiveness felt by beta users on the part of interaction and influence over Apple's operating system, as admitted by Federighi, we could see an updated approach for next year's batch of new updates, which will include iOS 17 and macOS 14.

vegetassj4
I thought the public releases were the betas the way things are going lately
Score: 41 Votes (Like | Disagree)

Craig, how about the following points I have been requesting for years:
- Better windows management on MacOS
- Notification sync between devices
- “Proper” iPadOS

I can list dozens of requested features that have been neglected in favor of silly changes to stock apps that are not really worthy of OS upgrades.

How about a Calculator App for an iPad?
Score: 29 Votes (Like | Disagree)

TheYayAreaLiving ?
Sometimes I feel like when users report the bugs they just sit there for months until something big happens.

The overall goal should be: Listen to one feedback at a time and get the bugs sorted out. One by One!
Score: 28 Votes (Like | Disagree)

IMPOSSIBLEMAN
Craig, how about the following points I have been requesting for years:
- Better windows management on MacOS
- Notification sync between devices
- “Proper” iPadOS

I can list dozens of requested features that have been neglected in favor of silly changes to stock apps that are not really worthy of OS upgrades.
Score: 18 Votes (Like | Disagree)

JM
The first step is to admit you have a problem.

At least he publicly admitted it, hopefully it means they will take steps to address it.
Score: 17 Votes (Like | Disagree)

While it's unclear what Apple will do to address the ineffectiveness felt by beta users on the part of interaction and influence over Apple's operating system, as admitted by Federighi, we could see an updated approach for next year's batch of new updates, which will include iOS 17 and macOS 14.

Seems to me Apple usually engage with something like this when they have/are soon to have something to bring to the table.
Score: 13 Votes (Like | Disagree)
Read All Comments