Safari 15's controversial new design on the Mac has led to complaints about the way the browser indicates which tab is active. 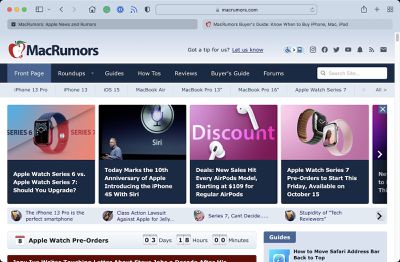 As illustrated by Daring Fireball's John Gruber, there was never any ambiguity about which tab is active in previous versions of Safari, as an active tab is shown with lighter shading that matches the browser's toolbar.

In Safari 15, however, tabs have a new button-like design with a rounder and more defined appearance. Apple has also inverted its shading of tabs, with an active tab now having darker shading and inactive tabs having lighter shading. The change has annoyed Gruber and other users, as evidenced by this Reddit thread with nearly 1,000 upvotes.

"The design is counterintuitive," wrote Gruber. "What sense does it make that no matter your settings, the active tab is rendered with less contrast between the tab title and the background than background tabs? The active tab should be the one that pops."

In a Safari 15 window with two tabs open, especially from the same website, Gruber said determining which tab is active is basically a guessing game. Gruber acknowledged that it is easier to discern the active tab when more than two tabs are open, but he said the confusion with exactly two tabs should have been reason enough to scrap the design change.

"I can't tell you how many times I closed the tab that I needed because of this," one Reddit user expressed in frustration.

Unfortunately for users who do not like the new design, Apple has not made any changes to the shading of tabs in either the Safari 15.1 beta or the latest version of the experimental Safari Technology Preview browser.

Bawstun
Just yet one more example of the poor designers Apple employs lately. It’s such a small thing but it speaks to a larger problem. Their user interface has sucked on many design angles for years. Just take a look at Apple Music. Nothing is as intuitive as it used to be…
Score: 140 Votes (Like | Disagree)

Joe_
When you got John Gruber (who defends Apple 24/7) agreeing with you, you’ll know Apple has messed up:
https://daringfireball.net/2021/10/the_tragedy_of_safari_15_quote_unquote_tabs
I have nothing personal against him but he defends Apple like it’s no tomorrow.
Score: 57 Votes (Like | Disagree)

PBG4 Dude
Never have I been so happy to not upgrade an Apple OS. Truly a first for me.
Score: 45 Votes (Like | Disagree)

bookofxero
It is "natural" scrolling all over again...
Score: 37 Votes (Like | Disagree)

paulypants
100% agree. Glad I'm not the only one finding this backwards.
Score: 36 Votes (Like | Disagree)

mapsdotapp
if Apple was brave enough they would have stuck to leaving the Compact tab layout as the default view. it eliminates all ambiguity about which tab is active and looks the best.
Score: 32 Votes (Like | Disagree)
Read All Comments

Wednesday October 6, 2021 12:58 am PDT by Tim Hardwick
Safari 15 has faced a barrage of complaints about its controversial new design, and while Apple has listened to user feedback and reversed some changes or made them optional, many users still struggle to discern an active tab from a background tab on the Mac browser because of the inverted shading. Unfortunately for users who do not like the new design, Apple has not made any changes to the...
Read Full Article • 118 comments

Friday June 11, 2021 5:22 am PDT by Tim Hardwick
In iOS 15, Safari has been completely redesigned with easier-to-reach controls in mind. Foremost is a new, compact tab bar that floats at the bottom of the screen when you're not inputting a URL address. Safari on iOS has also inherited the Start Page from macOS Big Sur, and you can now create tab groups to allow you to easily access them across devices. Let's take a closer look at how it all...
Read Full Article • 101 comments

Monday October 18, 2021 5:52 pm PDT by Juli Clover
With the macOS Monterey and iPadOS 15 release candidates that were seeded to developers today, Apple has eliminated the option to use the Color Tab Bar with the separate tab design in Safari. A tab bar with color in Safari 15 If you want to have a color tab bar that blends in with the background color of a website, you need to toggle on the Compact Tab Bar, which is the tab bar design that...
Read Full Article • 37 comments

Friday March 5, 2021 4:06 am PST by Tim Hardwick
Microsoft has officially released version 89 of its popular Chromium-based Edge browser, bringing its long-trialed vertical tabs feature to Mac for the first time. Vertical tabs are intended to make more efficient use of screen space, and should prove a welcome addition for users browsing on 16:9 ratio displays in particular. Users can click vertical tabs to switch between them and...
Read Full Article • 196 comments

Tuesday July 20, 2021 10:36 am PDT by Juli Clover
Google today updated its Chrome app for iOS devices to version 92, introducing a new feature that allows iPhone and iPad users to protect their Incognito tabs with Touch ID, Face ID, or a passcode. Locked Incognito tabs will not be visible until authenticated after leaving the Chrome app and reopening it, which will prevent someone who gets ahold of your device from viewing your Chrome tabs. ...
Read Full Article • 31 comments

Monday September 20, 2021 11:37 am PDT by Juli Clover
Apple today released Safari 15 for macOS Big Sur and macOS Catalina devices, with Apple introducing support for features that are going to be coming in the macOS Monterey update set to be released later this year. Safari 15 introduces a new look for Safari with rounded, more defined tabs and support for transparency, a compact tab bar option that can be toggled on or off, and Tab Groups....
Read Full Article • 142 comments