Google today announced that popular streaming music service Spotify will be able to bill Android users directly in the Google Play version of Spotify without needing to go through the Google Play billing system. 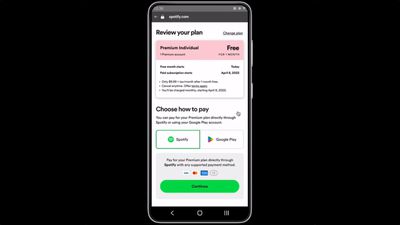 Spotify is Google's first partner for "User Choice Billing," a feature that allows Android users to make purchases using the payment option they prefer. User Choice Billing is essentially an alternative billing option for in-app purchases, and it comes with a reduced fee.

Spotify will be able to collect payments directly from users, and Google will charge Spotify four percent less than normal. Spotify and other developers who eventually adopt User Choice Billing will still need to give Google a cut of their app sales and purchases, but at the reduced rate. Google normally collects between 15 and 30 percent of in-app purchases, much like Apple.

In a blog post, Spotify said that Google has taken a "bold step to help level the playing field," and that "fair and open platforms" bring "frictionless consumer experiences."

Spotify has been publicly advocating for platform fairness and expanded payment options for years. We believe that fair and open platforms enable better, frictionless consumer experiences that also empower developers to imagine, innovate, and thrive.

Spotify is rolling out an initial test implementation of user choice billing to users in select countries starting this week. Google today also announced a partnership with Bumble, with Bumble adding support in the coming months.

User Choice Billing from Google is an option in 35 countries, including the United States, much of Europe, Australia, Japan, and more, and it is a pilot program that other developers are also able to join.

With User Choice Billing, Google has distinguished the Play Store from the App Store, as Apple does not let apps use alternative billing at this time. There are two exceptions, however, including South Korea and the Netherlands. Regulators in these countries have forced Apple to allow some apps to use third-party payment providers.

It's Android. Security doesn't exist there.

Apple won’t change unless forced. I don’t know who is right though ?‍♂️

I will not sign up if you don't allow me to pay for subs through Apple. It is way too easy to end subscriptions under Apple.
Score: 15 Votes (Like | Disagree)

TheYayAreaLiving ?
Dang! That's something Apple would never allow into the App store. But they may no longer have a choice anymore in the future.

Also, curious about how secure is the transaction is.
Score: 14 Votes (Like | Disagree)

Kierkegaarden
Did I read this correctly — Google will charge 4% less than normal? So instead of 30% or 15%, it will be 26% or 11%? I’m assuming Spotify would be in the higher category regardless, so we’re talking 26%. Does anyone think this will make any difference to Spotify? They want ZERO fees — they want to leach off the infrastructure that was built to allow their app to exist in the first place, and they want to pay nothing to support it.
Score: 11 Votes (Like | Disagree)

Naraxus
Apple will soon offer alternative payment options. Whether by legislation or Apple's own doing (lol) it's coming.
Score: 10 Votes (Like | Disagree)

They're definitely doing this only to piss off Apple.

Right... :rolleyes: It doesn't have anything to do with U.S. lawmakers on both sides of the aisle wanting to stop Apple and Google from requiring app developers to use their payment systems.


It's not just lawmakers in the U.S. who are concerned about and investigating this issue either.