Apple Watch Ultra has been endorsed by American musician and famous watch collector John Mayer, who has been showing off the new device on his Instagram account. 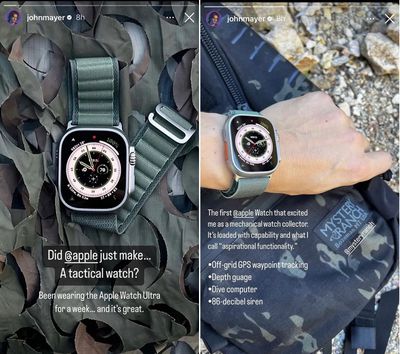 "Been wearing the ‌Apple Watch Ultra‌ for a week... and it's great," writes Mayer over a photo of the watch. "The first Apple Watch that excited me as a mechanical watch collector."

"It's loaded with capability and what I call 'aspirational functionality.'" Mayer then calls out some of his favorite features, including GPS tracking, a depth gauge, a dive computer, a siren to attract help in emergencies, and Night Mode.

Grammy award winner Mayer is considered the watch world's most influential collector, and is responsible for single-handedly spiking the value of individual watches he is spotted wearing in public, and of those he writes about in his column for horology website Hodinkee.

Mayer's influence is unlikely to have the same effect on the Ultra, which is probably being sold in the millions, but as GQ notes, his endorsement alone "probably registered as a sizable earthquake in Geneva" and will be a "huge deal" for anyone with a passion for Swiss watches and statement timepieces.

Apple has courted the luxury wristwatch world ever since 2015 when it unveiled the 18-karat gold Apple Watch Edition, which cost upwards of $10,000 and was available in limited quantities.

Unfortunately for Apple, unit sales of the gold Apple Watch Edition were reportedly in the low tens of thousands and the line was discontinued in September 2016 after just 16 months. Humorously, the models are now stuck on watchOS 4 and below.

But shocked they sold 10s of thousands of the gold Apple Watch. I would have guessed 10s.
Score: 25 Votes (Like | Disagree)

antiprotest
If he says he likes it, then he must be telling the truth and the watch must be good. And if I buy it, then I will be happy and he will know who I am and we will be best friends forever.
Score: 23 Votes (Like | Disagree)

SilenceBroken
"Humorously, the models are now stuck on watchOS 4 and below."

I don't feel bad AT ALL for anyone who bought that thinking it would have a long update life.
Score: 16 Votes (Like | Disagree)

Kylo83
So glad I returned mine and went back to series 7, it’s actually the first Apple product in years I started to hate
Score: 14 Votes (Like | Disagree)

Grammy award winner Mayer is considered the watch world's most influential collector, and is responsible for single-handedly spiking the value of individual watches he is spotted wearing in public, and of those he writes about in his column for horology website Hodinkee ('https://www.hodinkee.com').

Color me surprised - I had absolutely no idea this was the case. Only knew him in the context of his music.
Score: 12 Votes (Like | Disagree)
Read All Comments

Tuesday September 27, 2022 8:05 am PDT by Hartley Charlton
An Apple Watch Ultra user has modified their new device's casing to add a brushed finish and remove the orange color of the Action Button in an effort to make it more visually appealing. The Apple Watch Ultra offers the first complete redesign of the Apple Watch since the product line's announcement in 2014, and while the design has been met with praise from many users, some have criticized...
Read Full Article • 183 comments

Monday November 28, 2022 10:28 am PST by Joe Rossignol
Ahead of the Oceanic+ app launching on the Apple Watch Ultra today, a few individuals received some early hands-on time with a beta version of the app. Designed by Huish Outdoors in collaboration with Apple, the app allows the Apple Watch Ultra to be used as a dive computer for recreational scuba diving at depths up to 40 meters/130 feet. Image Credit: TechCrunch For those unaware, rising to ...
Read Full Article • 26 comments

Sunday September 25, 2022 2:27 pm PDT by Sami Fathi
A YouTuber has put Apple's claims for the durability of the Apple Watch Ultra to the test by putting it up against a drop test, a jar of nails, and repeated hits with a hammer to test the sapphire crystal protecting the display. TechRax, a channel popular for testing the durability of products, first tested the Apple Watch Ultra by dropping it from around four feet high. The Apple Watch...
Read Full Article • 198 comments

Friday September 23, 2022 12:26 pm PDT by Juli Clover
It's the official launch day for Apple's latest and greatest product, the Apple Watch Ultra. We picked up one of the new watches to check out the features and compare it with the Apple Watch Series 8 to see if it's worth the upgrade. Subscribe to the MacRumors YouTube channel for more videos. The Apple Watch Ultra is Apple's largest watch to date, measuring in at 49mm, a full 4mm over the...
Read Full Article • 195 comments

Friday December 2, 2022 10:54 am PST by Juli Clover
Google is continuing on with its attempt to convince Apple to adopt the RCS messaging standard, publishing a new "it's time for RCS" blog post. Promoted heavily by Google, RCS or Rich Communication Services is a messaging standard that is designed to replace the current SMS messaging standard. It provides support for higher resolution photos and videos, audio messages, and bigger file sizes, ...
Read Full Article • 621 comments