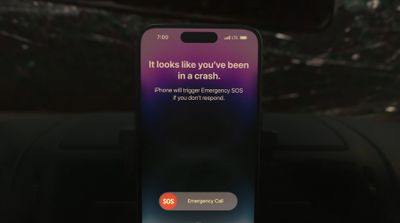 When a severe car crash is detected, a supported iPhone or Apple Watch displays an alert and sounds an alarm, according to Apple. If a user is able, they can call emergency services by swiping the Emergency Call slider on the iPhone or Apple Watch, or dismiss the alert. If they do not respond to the alert after 10 seconds, the device begins another 10-second countdown. If they still haven't responded, the device calls emergency services.


The car crash detection feature utilizes sensors like the accelerometer and gyroscope on a supported iPhone or Apple Watch. In a press release, Apple said the feature also relies on "advanced Apple-designed motion algorithms trained with over a million hours of real-world driving and crash record data" for increased accuracy.

trip1ex
can't wait to test this out.
Score: 19 Votes (Like | Disagree)

I still don’t get why this is iPhone version 14 and the new watch models only. Isn’t this just an accelerometer trick

It needs new hardware. A high g accelerometer that detects up to 256 Gs of acceleration and a high dynamic range gyroscope that can detect high speed rotation, like when the car, or your body, are spinning or rolling fast.
Score: 15 Votes (Like | Disagree)

carl76tr
This is perfect. Phone usage now both causes crashes and also calls for cleanup.
Score: 13 Votes (Like | Disagree)

LeadingHeat
These small things are the reason I stick with Apple. You don’t see other companies developing health and safety features like this. They’re too busy bragging about their megapixels.
Score: 11 Votes (Like | Disagree)

citysnaps
Excellent feature. Hope I or my family will never need it. But glad it's there in case we do.
Score: 8 Votes (Like | Disagree)

can't wait to test this out.

Appreciate your sacrifice ?
Score: 7 Votes (Like | Disagree)
Read All Comments

Wednesday November 30, 2022 2:16 pm PST by Juli Clover
The Crash Detection feature built into the iPhone 14, iPhone 14 Pro, and new Apple Watch models is causing skiers to accidentally dial emergency services, according to Utah news site KSL. Designed to summon help when a car crash is detected, the Crash Detection feature can be activated at ski resorts, and Summit County dispatchers in Utah have seen an increase in 911 calls. "We will get a ...
Read Full Article • 83 comments

Monday October 10, 2022 6:55 am PDT by Sami Fathi
In a new interview, two Apple executives have offered a deeper dive into the iPhone 14's new Crash Detection feature, which can detect if a user has been involved in a car accident and automatically contact emergency services and contacts. During the interview with TechCrunch's Brian Heater, Apple's vice president of worldwide iPhone product marketing, Kaiann Drance, and the company's vice...
Read Full Article • 110 comments

Sunday October 9, 2022 8:15 am PDT by Sami Fathi
The iPhone 14's Crash Detection feature is accidentally being triggered and therefore calling emergency services when users are riding a roller coaster rather than being involved in a real automotive accident. As reported by The Wall Street Journal, several users of the new iPhone 14 and iPhone 14 Pro at amusement parks across the United States have reported emergency services and contacts...
Read Full Article • 292 comments

Wednesday September 21, 2022 1:19 am PDT by Tim Hardwick
A YouTuber has quite literally crash-tested the iPhone 14's Crash Detection feature and found Apple's new emergency SOS function to reliably kick into action in the event of a controlled vehicle collision. Serial gadget-smasher TechRax today published a video (embedded below) in which his team can be seen remotely controlling a driverless car containing an iPhone 14 Pro strapped to the...
Read Full Article • 97 comments

Tuesday December 6, 2022 11:05 am PST by Juli Clover
Apple has scaled back its Apple Car project and the company no longer plans to release a fully self-driving vehicle, reports Bloomberg. Apple wanted to create a self-driving car without a steering wheel or pedals, but has decided that such a plan is not feasible at the current time. The vehicle will have guided driving features that work on highways, but it will not be able to operate...
Read Full Article • 189 comments