Apple does not advertise battery capacities for its new iPhone 14 lineup, but MacRumors has obtained this information from a Chinese regulatory database. 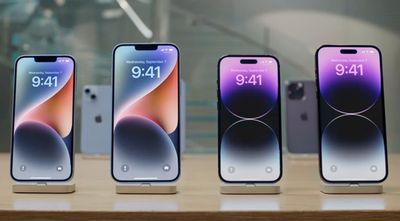 Battery capacities for the iPhone 13 lineup:

Battery capacities for the iPhone 14 lineup:

Due to its larger 6.7-inch display size and lack of some Pro model features, the iPhone 14 Plus features the longest battery life ever of any iPhone, according to Apple. However, this is not entirely true, as Apple's tech specs indicate that the iPhone 14 Pro Max still gets the longest battery life for video playback, likely due to the ProMotion display's ability to ramp down the refresh rate for lower power consumption.

All four iPhone 14 models were announced by Apple last week and have been available to pre-order since September 9. The devices are set to launch on September 16, with the exception of the iPhone 14 Plus, which will be available starting October 7.

Greenmeenie
So Apple got rid of the physical sim tray in the iPhone 14 Pro Max… but it’s battery size got smaller compared to the iPhone 13 Pro Max? ? You’d think if anything, it would get bigger.
Score: 23 Votes (Like | Disagree)

It’s interesting how the non Pro models have larger batteries.

So Apple got rid of the physical sim tray in the iPhone 14 Pro Max… but it’s battery size got smaller compared to the iPhone 13 Pro Max? ? You’d think if anything, it would get bigger.

You got an extra hour of battery life in the 14PM, though. That phone was already ten steps ahead of others in the battery life department.
Score: 11 Votes (Like | Disagree)

Video playback:
Up to 29 hours

Video playback (streamed):
Up to 25 hours

Audio playback:
Up to 95 hours

Video playback:
Up to 26 hours

Video playback (streamed):
Up to 20 hours

Audio playback:
Up to 100 hours

The only battery spec the iPhone 14 Plus has better than the iPhone 14 Pro Max is audio playback. It lacks on Video playback so I wouldn't call it "the longest battery life ever of any iPhone".
Score: 11 Votes (Like | Disagree)
Read All Comments

Monday October 17, 2022 12:11 pm PDT by Sami Fathi
The iPhone 14 Pro and iPhone 14 Pro Max dominated other flagship smartphones, including Google's new Pixel 7 and Samsung's Galaxy S22 Ultra, in recent battery life tests. The battery test was conducted by PhoneArena and compared some of the most popular flagship smartphones currently on the market, including the new Pixel 7, Pixel 7 Pro, and last year's Pixel 6 Pro, against each other for...
Read Full Article • 80 comments

'iPhone 14 Plus' Rumored as Actual Name of Standard 6.7-Inch Model

Wednesday August 31, 2022 10:45 am PDT by Joe Rossignol
Apple is expected to announce four new iPhone 14 models at its September 7 event, including a standard 6.7-inch model that has been widely referred to as the "iPhone 14 Max" in rumors. However, the device could actually end up having a different name. According to a photo of an alleged iPhone case from Apple, shared by Twitter user "Tommy Boi," the new 6.7-inch model might actually be named...
Read Full Article • 146 comments

Wednesday October 5, 2022 3:24 am PDT by Sami Fathi
The iPhone 14 Plus is Apple's latest entry-level iPhone alongside the standard iPhone 14, featuring a larger display, improved cameras, performance, and more. Announced last month, the iPhone 14 Plus officially begins arriving to customers on Friday, October 7. Ahead of when the new iPhone is expected to begin arriving to customers, we wanted to highlight some possibly lesser-known facts...
Read Full Article • 78 comments