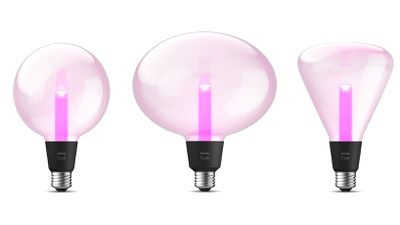 Available in three shapes that include large globe, ellipse, and triangular, the Lightguide bulbs have an inner tube that offers diffuse light in white or one of sixteen million colors, similar to other Philips Hue color bulbs. The Lightguide bulbs are being sold alongside a pendant cord and metal holder that's available in either black or white and that can be used for a single Lightguide bulb.

There's also a new Philips Hue Filament candle bulb that comes in White ambiance, and it joins the existing White and Color ambiance bulb option. A Philips Hue slim downlight with a more slender profile is available for ceiling installations in areas with limited space. The downlight offers 1200 lumens and can be dimmed for an ideal lighting setup.

For PC gamers, there's a Philips Hue gradient lightstrip that is designed to connect to a monitor. It comes in 24/27-inch and 32/34-inch sizes for single monitor setups, plus there is a longer strip for three monitor-setups that use 24 to 27-inch displays. The lightstrip is designed to flash, dim, and brighten to match gameplay.

Later this year, the Philips Hue sync app used for the Philips Hue Sync Box will merge with the main Hue app for an all-in-one management experience. The app is also gaining a Mimic Presence automation that's designed to make it look like someone's home by automatically turning lights on and off at their regular times.

More information on the new products can be found on the Philips Hue website.

If you look at my post history you'll see I dump on most giant corps for being the slimy scum they are. Philips is not one of those companies. They are legit. I have Philips products made in the 1950's that are still perfect. I've spent thousand$ on their bulbs. They are probably the most legit giantcorp on earth. I wish they made a phone, I'd dump Apple for Philips in a nanosecond.

Philips is actually related to Philips Hue in name only. Philips has been selling off all non-health-related businesses for years now. The Hue line is manufactured by Signify, which purchased the right to continue using the Philips name and branding. Similarly for batteries, monitors, etc. Philips is now focusing on ultrasound machines, MRIs, etc., as well as some products that are more related to personal health (air fryers, shavers, etc.).
Score: 6 Votes (Like | Disagree)

These are MUCH more aesthetic than the other E27 Philips Hue color bulbs, nice alternative design and wish I had this option back when I bought mine.

I have a couple of the original Hue bulbs which I bought in around 2014 and they just don’t die! I’m going to offer them to my sister as an excuse to upgrade.
Score: 4 Votes (Like | Disagree)

Aston441
If you look at my post history you'll see I dump on most giant corps for being the slimy scum they are. Philips is not one of those companies. They are legit. I have Philips products made in the 1950's that are still perfect. I've spent thousand$ on their bulbs. They are probably the most legit giantcorp on earth. I wish they made a phone, I'd dump Apple for Philips in a nanosecond.
Score: 3 Votes (Like | Disagree)

seanmills1020
The CEO of Philips named his two sons HUGH and PHIL (for filament).

If you look at my post history you'll see I dump on most giant corps for being the slimy scum they are. Philips is not one of those companies. They are legit. I have Philips products made in the 1950's that are still perfect. I've spent thousand$ on their bulbs. They are probably the most legit giantcorp on earth. I wish they made a phone, I'd dump Apple for Philips in a nanosecond.

Not sure I get your point. Are we supposed to hate on people and companies for fleeing a horrible war?

No. They saved a lot of people by doing so.
Score: 2 Votes (Like | Disagree)
Read All Comments