Third-party VPNs made for iPhones and iPads routinely fail to route all network traffic through a secure tunnel after they have been turned on, something Apple has known about for years, a longtime security researcher has claimed (via ArsTechnica). 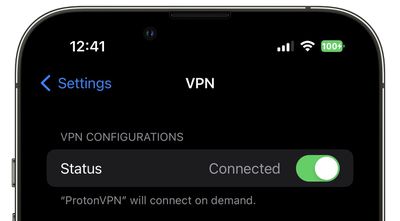 Writing on a continually updated blog post, Michael Horowitz says that after testing multiple types of virtual private network (VPN) software on iOS devices, most appear to work fine at first, issuing the device a new public IP address and new DNS servers, and sending data to the VPN server. However, over time the VPN tunnel leaks data.

Typically, when a users connects to a VPN, the operating system closes all existing internet connections and then re-establishes them through the VPN tunnel. That is not what Horowitz has observed in his advanced router logging. Instead, sessions and connections established before the VPN is turned on are not terminated as one would expect, and can still send data outside the VPN tunnel while it is active, leaving it potentially unencrypted and exposed to ISPs and other parties.

"Data leaves the iOS device outside of the VPN tunnel," Horowitz writes. "This is not a classic/legacy DNS leak, it is a data leak. I confirmed this using multiple types of VPN and software from multiple VPN providers. The latest version of iOS that I tested with is 15.6."

Horowitz claims that his findings are backed up by a similar report issued in March 2020 by privacy company Proton, which said an iOS VPN bypass vulnerability had been identified in iOS 13.3.1 which persisted through three subsequent updates to iOS 13.

According to Proton, Apple indicated it would add Kill Switch functionality to a future software update that would allow developers to block all existing connections if a VPN tunnel is lost.

However, the added functionality does not appear to have affected the results of Horowitz's tests, which were performed in May 2022 on an iPadOS 15.4.1 using Proton's VPN client, and the researcher says any suggestions that it would prevent the data leaks are "off base."

Horowitz has recently continued his tests with iOS 15.6 installed and OpenVPN running the WireGuard protocol, but his iPad continues to make requests outside of the encrypted tunnel to both Apple services and Amazon Web Services.

As noted by ArsTechnica, Proton suggests a workaround to the problem that involves activating the VPN and then turning Airplane mode on and off to force all network traffic to be re-established through the VPN tunnel.

However, Proton admits that this is not guaranteed to work, while Horowitz claims Airplane mode is not reliable in itself, and should not be relied on as a solution to the problem. We've reached out to Apple for comment on the research and will update this post if we hear back.

xxray
I remember this getting reported on a couple years ago, and never getting an update. I just assumed it had been fixed.

I’m so glad my privacy has been compromised for the last 2.5 years and still is being compromised while Apple knows about it and does nothing about it.
Score: 64 Votes (Like | Disagree)

antiprotest
While other companies screw you on the cloud, Apple screws you "on device."
Score: 44 Votes (Like | Disagree)

BootsWalking
This may seem like a benign annoyance but some people rely on VPNs for very important situations, like reporters who need it to protect their sources or themselves.
Score: 44 Votes (Like | Disagree)

arkitect
Ah, well that probably explains why on my last trip to *cough* a country that shall remain unnamed, but where the Fruit company has many things manufactured *cough* my VPN went tits up and I was unable to use my favourite search engine.

VulchR
Nice to know Apple was faffing about with CSAM stuff while this vulnerability just sat there. Perhaps Apple should refund those of us who pay for VPN services? I live in the UK, where pretty much everybody, at every level of government, can gain access to your browsing history unless you use a VPN.
Score: 29 Votes (Like | Disagree)

JM
Come on, y’all. Little ol’ Apple is doing the best they can. Bless their heart.
Score: 24 Votes (Like | Disagree)
Read All Comments

Thursday October 13, 2022 8:41 am PDT by Hartley Charlton
iOS 16 continues to leak data outside an active VPN tunnel, even when Lockdown mode is enabled, security researchers have discovered. Speaking to MacRumors, security researchers Tommy Mysk and Talal Haj Bakry explained that iOS 16's approach to VPN traffic is the same whether Lockdown mode is enabled or not. The news is significant since iOS has a persistent, unresolved issue with leaking...
Read Full Article • 146 comments

Wednesday November 16, 2022 1:43 pm PST by Eric Slivka
One of the new features in iOS 16 is Rapid Security Response, which lets Apple push out important security fixes to users without requiring a full iOS update. For users running the iOS 16.2 beta, Apple today released one of those updates to deliver unspecified bug fixes affecting the software. iOS Security Response 16.2 (a) arrives via the standard Software Update mechanism in the Settings...
Read Full Article • 53 comments

Thursday October 27, 2022 12:05 pm PDT by Juli Clover
Apple today introduced Apple Security Research, a new website that is dedicated to improving the methods available to security researchers for reporting issues to Apple. The site offers up tools for sending Apple security reports, getting real-time status updates, and communicating with Apple engineers. In addition to housing information on the Apple Security Bounty program, the website is a ...
Read Full Article • 34 comments

Thursday October 27, 2022 10:12 am PDT by Juli Clover
Apple today released iOS 15.7.1 and iPadOS 15.7.1, operating system updates that are designed for older iPhones and iPads unable to run iOS 16 and iPadOS 16. The updates are also available to those who have chosen not to update to iOS 16 at this time. The ‌iOS and iPadOS 15.7.1‌ updates can be downloaded on eligible iPhones and iPads over-the-air by going to Settings > General >...
Read Full Article • 66 comments

Monday November 14, 2022 9:44 am PST by Juli Clover
Some iPhone and iPad users appear to be experiencing a curious bug in Safari at the current time, with the app crashing when certain search terms are entered. The bug has been going on since last night, from what we can tell, and affected users are running a variant of iOS 16, though there are also reports from iOS 15 users. Reports suggest that Safari crashes after the first three letters...
Read Full Article • 58 comments