Apple this week brought back one of the most highly requested features from iOS users since the launch of the iPhone X in 2017: the ability to see your battery percentage directly in the status bar. 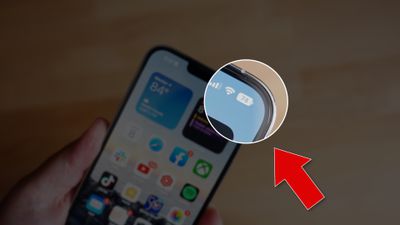 Ever since the launch of the iPhone X with the notch, Apple has not allowed users to show their battery percentage directly in the status bar, forcing them to swipe down into Control Center to glance at their current battery level.

With the launch of iOS 16 in just a few weeks, that's set to change. The fifth developer beta of iOS 16 includes a new toggle that allows users to always show their battery percentage in the status bar.

When Low Power Mode is enabled, the battery glyph and the percentage turn yellow, and when low on battery, it turns red. When charging your iPhone, it turns green. The battery percentage is visible in the status bar across the system, including on the Lock Screen.

All flagship iPhones since the iPhone X have had a notch, yet not all customers with notched iPhones will gain this new feature.

Here is the list of iPhones that will gain the ability to display the battery percentage directly in the status bar:

All other iPhones, including the smaller iPhone 13 mini and iPhone 12 mini, the iPhone 11, and the iPhone XR, do not have the battery percentage option. As iOS 16 is still in beta testing, Apple may decide to expand the list to include other iPhones in the future so we'll have to wait and see.

While it's not entirely clear why Apple has chosen to limit the availability of this feature, it may be due to space constraints on the smaller displays.

CrazyForCashews
Having the battery percentage exclusive to select iPhones is one of the dumbest things Apple has ever done.

Sometimes I believe Apple thinks with their butt first then their head.
Score: 36 Votes (Like | Disagree)

im_to_hyper
I bought a mini for a reason... let me squint
Score: 27 Votes (Like | Disagree)

mihirdelirious
What a stupid design decision to hide the Battery percentage in the first place! And now Apple only allows select devices to view the battery percentage!
Also, why can't the iPhone show battery percentage always on the Lock Screen? Just beneath the Date and Time.
Score: 17 Votes (Like | Disagree)
Read All Comments

Monday August 15, 2022 1:56 pm PDT by Juli Clover
The sixth beta of iOS 16 that was provided to developers and public beta testers today focuses mainly on bug fixes and other under-the-hood improvements, but it does make one small change to the battery percentage status bar feature that was introduced in the prior beta. When using Low Power mode, it is now possible to turn off the percentage indicator that is shown in the status bar,...
Read Full Article • 54 comments

Saturday September 3, 2022 2:19 am PDT by Sami Fathi
Apple plans to bring the classic iOS battery indicator back to the status bar directly on the upcoming iPhone 14 Pro and iPhone 14 Pro Max, taking full advantage of the added screen space at the top of the display thanks to a new pill-shaped notch replacement. According to information shared with MacRumors and images posted on the MacRumors forums, Apple will bring back the classic iOS...
Read Full Article • 87 comments

Tuesday September 13, 2022 1:00 am PDT by Sami Fathi
Following iOS 16's public release, Apple has confirmed that users of older generation iPhone models will miss out on the ability to show their iPhone's battery percentage directly in the status bar. In an updated support document, Apple says that the new battery percentage display is not available on the iPhone XR, iPhone 11, the iPhone 12 mini, and the iPhone 13 mini. Apple provides no...
Read Full Article • 132 comments

Monday August 8, 2022 10:43 am PDT by Juli Clover
With the fifth beta of iOS 16, Apple has updated the battery icon on iPhones with Face ID to display the specific battery percentage rather than just a visual representation of battery level. The new battery indicator is available on iPhone 12 and iPhone 13 models, with the exception of the 5.4-inch iPhone 12/13 mini. It is also available on the iPhone 11 Pro and Pro Max, XS and XS Max, and...
Read Full Article • 361 comments

Tuesday September 20, 2022 10:53 am PDT by Juli Clover
Apple today released the second beta of iOS 16.1, introducing further tweaks to the battery percentage indicator that is located in the status bar. With today's beta, the battery level of the icon depletes as the battery depletes, providing a better visual indication of what battery level is at alongside the percentage. If the percentage feature is enabled, you will now see the charge...
Read Full Article • 111 comments

Wednesday September 14, 2022 11:12 am PDT by Juli Clover
Apple in iOS 16 updated the battery icon on iPhones with Face ID to display the specific battery percentage rather than just a visual representation of battery level. At launch, this feature did not include the iPhone 13 mini, iPhone 12 mini, iPhone XR, or iPhone 11, but according to multiple reports from the MacRumors forums and Twitter, all of these iPhones now support the feature....
Read Full Article • 131 comments