Massive sales have hit the latest Apple Watches for Prime Day in 2022, with the lowest prices available across nearly every model of the Apple Watch SE and Apple Watch Series 7. 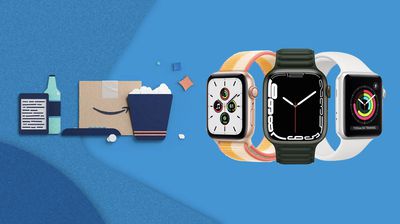 Note that we're focusing on the Aluminum versions of the Apple Watch SE and Series 7 in this article, but you'll also find a few deals on higher-end options as well.

Check out our article on The Best Apple Deals for Amazon Prime Day to stay up to date with this summer's big shopping event.

Similar to the Apple Watch SE, we're seeing huge discounts on the Series 7 lineup today. Amazon has discounted these Apple Watch models by $120, with numerous reaching all-time low prices because of these Prime Day deals.

temende
Even at this discount, I still have yet to find a good use case for me personally that makes an apple watch worth the money...I think if they added non-invasive blood glucose monitoring that would seal the deal for me
Score: 2 Votes (Like | Disagree)

16_inch_MacBook_Air_Pls
I bought the 45mm Wifi Series 7 for $429 about 3 months after launch right from Apple. It seems to me waiting for price drops on Apple Watch is the right move? Since new generations don't really bring that many tangible benefits. Series 8 is rumored to use the same chip as S7 and S6 which is quite disappointing.

For iPhone I intend to buy at launch since there are almost no price drops until the next generation actually launches. And the year over year improvement is more significant.
Score: 2 Votes (Like | Disagree)

bgraham
Apple Watches depreciate the quickest in value because they're the worst Apple product, fact
Score: 1 Votes (Like | Disagree)

Even at this discount, I still have yet to find a good use case for me personally that makes an apple watch worth the money...I think if they added non-invasive blood glucose monitoring that would seal the deal for me

People with diabetes already have monitors that are far better than what an Apple Watch could offer. But for people trying to stay away from insulin spikes and monitoring a diet like LCHF it would be helpful.
Score: 1 Votes (Like | Disagree)