Apple has won a patent for a dual monitor stand that appears to be based on the "Pro Stand" design option for the Studio Display and Pro Display XDR. 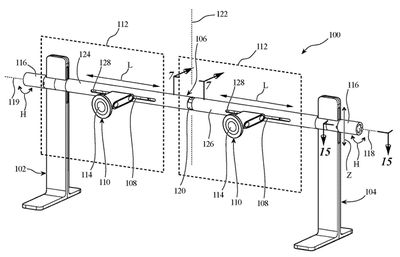 The patent filing first surfaced in 2020, but now the United States Patent and Trademark Office has officially granted Apple the patent. The granted patent, spotted by Patently Apple, is simply titled "Dual Display Stand," and details a mechanical design that seeks to address the shortcomings of existing multi-display solutions, offering easy and precise adjustment for up to two external displays.

The filing outlines a large display stand with two spaced-apart legs, connected by a horizontal support bar that allows two displays to be mounted. The stand allows for a high level of precise adjustment and control, with vertical, horizontal, and center pivot degrees of freedom. Apple offers a brief description of the improvements offered by the stand in the patent:

The display stand provides improved smoothness, rigidity, and comfort for the user to support and use multiple displays on a single stand.

The stand seems to use the same moveable joints as the existing Pro Stand for the Studio Display and Pro Display XDR, but places them on rail shuttles for horizontal adjustment. A central joint on the support bar allows the stand to adjust the angle between the displays.

The stand has handles on each side that can be twisted to easily adjust the height of the support bar for exact vertical adjustment. The patent notes that the entire bar is lifted regardless of the angle of the support bar or which handle is turned.

The patent also stresses that the shuttles on the continuous rail provide "smooth, consistent contact" with the rails despite adjustments to the support bar using wheels.

The filing explains why the Dual Display Stand solution may be better than existing third-party stand solutions such as independently-movable VESA-mount arms:

When it first emerged in 2020, it was striking how far developed the patent filing was, effectively outlining an entire product. Normally, Apple's patent filings focus on a specific part of a device or system, and while the dual display stand's mechanical operations are all able to come under a single filing, there are very clear similarities to the existing Pro Stand alongside a pronounced level of detail for a hitherto unknown Apple accessory.

Given this level of completeness, it is possible that Apple may be planning to bring the Dual Display Stand to customers at some point in the future. There is also a chance it may be reserved for internal corporate use or simply for retail store display units. That being said, patent filings only reliably show what Apple is researching and developing, and many aspects detailed in its patents never materially emerge.

Apple's Pro Stand for the Pro Display XDR, sold separately from the display itself, caused controversy when it was announced in June 2019 for its $999 price tag. In March this year, Apple brought the same height- and tilt-adjustable stand design to the Studio Display with a $400 add-on option. At minimum, the patent suggests that Apple's work on new mechanical display stands is ongoing.

Lol, this is supposed to replace two $1k stands, it'll easily be $2499 for the privilege of owning an Apple "Pro" stand.
Score: 17 Votes (Like | Disagree)

fwmireault
Can’t imagine how over engineered and overpriced this stand would be
Score: 14 Votes (Like | Disagree)

Wednesday March 9, 2022 4:09 am PST by Sami Fathi
Apple's new Studio Display comes with three different mounting options - a normal stand that only tilts, a tilt and height-adjustable stand, and a VESA mounting adapter. What's crucial to note is that the stands are built into the display and, thus, are not interchangeable. When placing an order for the Studio Display, Apple warns that "each stand or mount adapter is built in. They are not...
Read Full Article • 306 comments

Monday March 21, 2022 9:26 am PDT by Joe Rossignol
While fine print on Apple's website says Studio Display stands and VESA mount adapters are "not interchangeable," customers can visit an Apple Store or Apple Authorized Service Provider to have their Studio Display reconfigured after purchase. For example, if a customer bought a Studio Display with the standard tilt-adjustable stand and later decides they want to use a VESA mount adapter,...
Read Full Article • 209 comments

Thursday July 21, 2022 9:17 am PDT by Joe Rossignol
Four months after Apple released the Studio Display, shipping estimates for the display are finally showing significant improvement in many countries. While the Studio Display was estimated for delivery in 8-10 weeks as of May, and in 6-8 weeks as of June, Apple's online store now shows a much shorter 1-2 week delivery estimate for new orders in the United States. These timeframes apply to...
Read Full Article • 106 comments

Tuesday August 2, 2022 1:26 am PDT by Sami Fathi
Apple has admitted that customers using the Studio Display may experience audio-related issues, including sound unexpectedly and abruptly cutting out, audio playing at a high speed, distorted audio quality, and choppy playback. In a memo to authorized service providers, obtained by MacRumors, Apple acknowledges that customers may find themselves facing speaker issues with the company's $1599 ...
Read Full Article • 228 comments