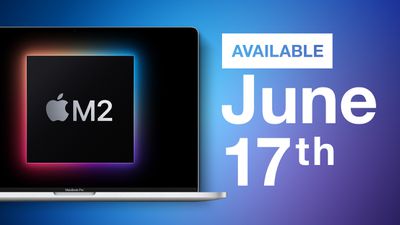 Apple had previously said the new 13-inch MacBook Pro would be available in July, so orders are running ahead of schedule. Customers will be able to place an order via Apple.com, the Apple Store app, or through select Apple Authorized Resellers.

The new 13-inch MacBook Pro features the same design as the previous model, including the Touch Bar, with the only notable change being the addition of the M2 chip. Pricing starts at $1,299 in the United States, with silver and space gray color options.

Apple said the M2 chip has an 18% faster CPU, a 35% faster GPU, and a 40% faster Neural Engine compared to the M1 chip. With the M2 chip, the 13-inch MacBook Pro can be configured with up to 24GB of unified memory, whereas the M1 chip maxes out at 16GB of memory. The notebook can also be equipped with up to 2TB of SSD storage.

Apple did not provide an order date for the new MacBook Air with the M2 chip, which remains listed as "available next month" on Apple's website.

While the new 13-inch MacBook Pro and MacBook Air models are both equipped with the M2 chip, one notable difference between the notebooks is that the MacBook Pro features an active cooling system to ensure sustained performance for those with "more demanding workflows," according to Apple, whereas the MacBook Air has a fanless design.

alexe
I don't understand why anybody would buy this over the MacBook Air.
Score: 34 Votes (Like | Disagree)

Joe Dohn
Question: are M1 iPads powerful enough to create icons on the desktop, or will that feature be restricted to M2 iPads only? ?
Score: 27 Votes (Like | Disagree)

UltimateSyn
Missing out on the Air's vastly improved webcam, larger screen, new design, lowered weight, full-height function key row and MagSafe... But it has a fan.
Score: 19 Votes (Like | Disagree)

trifero
The absurdest mac ever.
Score: 15 Votes (Like | Disagree)
Read All Comments

Friday June 17, 2022 5:01 am PDT by Joe Rossignol
The new 13-inch MacBook Pro with the M2 chip is now available to order worldwide via Apple.com and the Apple Store app. The first deliveries to customers and in-store availability will begin Friday, June 24, according to Apple. Some built-to-order configurations with upgraded storage and memory already have shipping estimates pushing into early August in the United States. The new 13-inch ...
Read Full Article • 114 comments

Thursday November 24, 2022 4:17 am PST by Hartley Charlton
The iPad Pro is now more powerful than the iMac and the Mac mini due to featuring a more advanced chip, as the two desktop Macs are left with older hardware. The iMac and Apple's two Mac mini models have been left with the M1 chip from 2020, despite the launch of a plethora of devices featuring the M2 chip – meaning that they are outdated compared to the 13-inch MacBook Pro, redesigned...
Read Full Article

Monday December 5, 2022 11:44 am PST by Juli Clover
Due to production issues at Apple supplier factories in China, the iPhone 14 Pro and iPhone 14 Pro Max are backordered and basically out of stock at every store. If you were planning to gift or receive an iPhone 14 Pro model for the holidays and didn't already get one, you're basically out of luck because they're gone until late December. Subscribe to the MacRumors YouTube channel for more ...
Read Full Article • 147 comments