Apple yesterday unveiled iPadOS 16, the newest version of the iOS operating system designed for the tablet form factor. ‌iPadOS 16‌ has many of the features that are coming to iOS 16, but it also has some iPad specific updates. 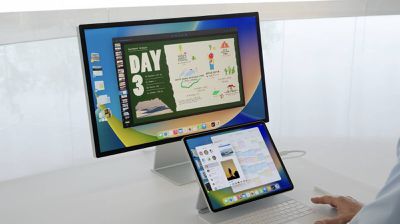 One of those new features is an updated multitasking system called Stage Manager, but many ‌iPad‌ users are never going to get to test out ‌Stage Manager‌ because it only works on M1 iPads. There are just three ‌M1‌ iPads at the current time, the ‌M1‌ 11-inch iPad Pro, the ‌M1‌ 12.9-inch ‌iPad Pro‌, and the ‌M1‌ iPad Air.

All other iPads that are using A-series chips simply will not get access to the new ‌Stage Manager‌ feature, and it is by far the biggest ‌iPadOS 16‌ change.

Also available on Mac, ‌Stage Manager‌ is a whole new multitasking experience. You can overlap windows for the first time on the ‌iPad‌, and resize those windows as well. The window of the main app that you're working on is front and center, with your other recently used apps off to the left for quick access when you need to swap.

The 64GB fifth-generation ‌M1‌ ‌iPad Air‌ is the most affordable ‌iPad‌ that supports the ‌Stage Manager‌ feature, and it is priced at $599. The ‌M1‌ ‌iPad Pro‌ models are priced starting at $799 for the 11-inch version and $1099 for the 12.9-inch version, but we do not recommend an ‌iPad Pro‌ purchase at this time as a refresh is in the works.

freakomac
The 2020 iPad Pro is technically just the previous gen, it’s not fair that it doesn’t get this feature. It’s a $1000 device!
Score: 36 Votes (Like | Disagree)

Lounge vibes 05
This doesn’t actually bother me as much as I thought it would.
The iPad Pro is crazy expensive, it should get more functionality than $329 iPads.
However there is a small caveat.
I am very much annoyed that A12Z iPad Pro‘s that aren’t even two years old don’t get these features.
They use that exact same processor for the Apple Silicon transition kit to run a complete version of macOS, so it is absolutely possible.
It’s a real shame they’re leaving those customers who paid just as much or around the same amount for their 2020 iPad pros as those who purchased the 2021 iPad pros.
Score: 35 Votes (Like | Disagree)

DanteHicks79
Holy crap, the one time I actually have the device that the new feature works on only!
Score: 32 Votes (Like | Disagree)

MacOH21
"This deal is getting worse all the time." - Lando Calrissian
Score: 26 Votes (Like | Disagree)

The 2020 iPad Pro is technically just the previous gen, it’s not fair that it doesn’t get this feature. It’s a $1000 device!

I don't think it's about fairness. What I find really really terrible is that the A12Z could easily handle the feature too and they're just gate keeping it 'because'
Score: 22 Votes (Like | Disagree)

funnyboy88
Pretty crazy that you could’ve bought an $1100 iPad Air 4 (256GB with Magic Keyboard) just a few months ago and not get this feature.
Score: 16 Votes (Like | Disagree)
Read All Comments