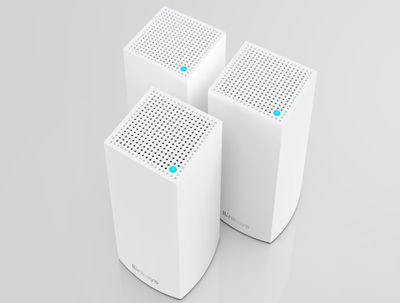 The Linksys Atlas 6 is a whole-home mesh wireless system that Linksys says is ideal for hybrid work, online gaming, 4K TV streaming, and more, and that the router is designed to be used with internet service plans that offer up to gigabit speeds.

Each node has three 1GBbE Ethernet ports for connecting to devices, and the system comes in three configurations. The Atlas 6 can be managed with the Linksys app, and it is a mesh system so it can be adjusted with a different number of nodes.

The Hydra 6 is slightly more expensive at $180, and it is a WiFi 6 dual-band mesh router that is aimed at delivering faster, more robust, and more reliable connections, according to Linksys.

It too is designed for service plans up to a gigabit, and nodes have four 1GbE Ethernet ports for wired connections. Linksys also plans to begin selling the Hydra 6 in early summer, and both systems will be available from the Linksys website.

larrylaffer
There will never be another router as great as the WRT54G.
Score: 38 Votes (Like | Disagree)

BeefCake 15
Stay away from Linksys...they lost their way since the acquisition.
Score: 11 Votes (Like | Disagree)

You mean since the acquisition by Belkin nearly a decade ago, right? ;)
Score: 5 Votes (Like | Disagree)

Why stay away? What were your issues?

Where do I start?
Ok, so the one I bought was advertised as supporting HomeKit. Said so right on the box. Get home, install it and found out it does not support HomeKit. Did some googling and came across the linksys forums. Had I done this before, I never would’ve bought it.

It took over a year for HomeKit support to be added. And all the while every update was filled with bugs.

Right now, my nodes will stop talking to each other even though they are hardwired. One node with suddenly decided to work at lower Wi-Fi speeds for no apparent reason.

I’ve had to restart these multiple times.
Score: 4 Votes (Like | Disagree)
Read All Comments