Google today announced it is partnering with iFixit to make do-it-yourself repairs available for Pixel smartphones in select regions. 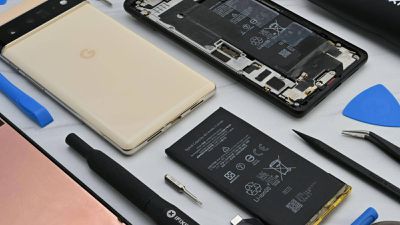 Starting later this year, genuine Pixel parts will be available for purchase on iFixit's website for the Pixel 2 through Pixel 6 Pro, as well as future Pixel models, in the United States, United Kingdom, Canada, Australia, and European Union countries where Pixel smartphones are available, according to Google. Batteries, displays, cameras, and other parts will be available both individually and as part of iFixit toolkits.

Google's announcement comes one day after the European Parliament voted in support of proposed "Right to Repair" legislation planned for later in 2022. Samsung last week announced plans to launch a similar self-service repair program for some Galaxy smartphones, also in partnership with iFixit.

"If we're going to build a sustainable electronics industry, consumers must have options to repair products themselves," said iFixit CEO Kyle Wiens. "Google is making repair more affordable and accessible, even in places without repair shops. We are committed to enabling repairs at a place and time of your choosing."

iFixit said it will be continuing to write its step-by-step repair guides for Pixel smartphones, with guides for the Pixel 5a, 6, and 6 Pro in progress.

In November 2021, Apple also announced that it would be launching a self-service repair program in the United States in early 2022, followed by additional countries throughout the year. Apple said the initial phase of the program would focus on the most commonly serviced parts for all iPhone 12 and iPhone 13 models, such as displays, batteries, and cameras, and expand to Macs with M1 chips later in the year.

Apple has yet to launch its self-service repair program or publicly share any further details since its initial announcement.

TheYayAreaLiving ?
Dang, I wish Apple had done a partnership with Fixit. Hopefully, Apple is up next.
Score: 19 Votes (Like | Disagree)

Dang, I wish Apple had done a partnership with Fixit. Hopefully, Apple is up next.

HalfFullmoon
Apple changed the battery of my iPhone 8 and broke the Touch ID. If official technicians can't do it properly, then there is no way I would risk it. Providing parts and partnering with repair companies are all a cover to not provide easily replaceable batteries. Instead of putting more and more cameras in the rear, phone manufacturers should focus on that.
Score: 12 Votes (Like | Disagree)

Macative
iFixit: "If we're going to build a sustainable electronics industry, consumers must have options to repair products themselves,"

...and what better way to do that than paying us to be a part of the process.
Score: 11 Votes (Like | Disagree)

LeeW
Makes sense, no doubt part of this agreement will be that iFixit provides the guides on how to replace the parts along with the right tools to do it. That is way better than just offering parts with no instruction.

But of course, a positive step by another manufacturer will never be acceptable for Mac Rumors members huh..
Score: 10 Votes (Like | Disagree)
Read All Comments