Developer Marco Arment's popular third-party podcast player Overcast received an update today that brings the largest redesign in the app's near eight-year history, with frequently requested features added and many under-the-hood improvements made. 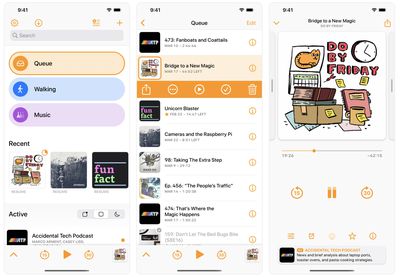 Firing up the updated app, regular users will first notice the overhauled home screen, with new customizable visual identities for playlists (which can now be manually ordered with drag-and-drop).

For quicker access, users can now opt to see recently played and newly published podcast episodes on the home screen, similar to the Overcast widget and CarPlay experience, while podcasts can now be pinned to the top of the home screen list.

Elsewhere, the "Podcasts" and "Played Podcasts" sections now have a toggle at the top that can be used to switch the interface to list podcasts with current episodes, all followed podcasts, and inactive podcasts (those not followed or which haven't published a new episode in a long time).

Top of the much-requested features category is a new Mark as Played checkmark button on episode rows, which is also a left-side swipe action. There is also now a way to view all starred episodes, with special playlist options for Starred, Downloaded, and In Progress.

Amongst other improvements and bug fixes: The light and dark themes now each have a customizable tint color from the modern iOS UI-color palette, notifications and background downloads are much more reliable, episode downloads can now be individually deleted or re-downloaded, links can be opened in Safari, and performance has been enhanced when dealing with very large playlists and collections.

Overcast 2022.2 is available for ‌iPhone‌ and iPad from the App Store in the form of an ad-supported free version or $9.99 per year ad-free. [Direct Link]

When I had an Iphone, Overcast was my go to app, but it had gotten a bit boring. I switched to Android and use Podcast Addict now, but it seems like maybe I shouldn't have switched.

I have to say, I'm a bit confounded by the idea that someone would switch Podcast apps because the UI was boring. Boring and predictably functional is exactly what I want, personally, in an app where I'm rarely going to look at the UI for more than a few seconds at a time.
Score: 13 Votes (Like | Disagree)

siddavis
Love me some Overcast, so I can’t wait to check out the improvements. I hope some CarPlay enhancements are in there too.
Score: 11 Votes (Like | Disagree)

Localcelebrity
Can’t speak to the usability but man that is an ugly looking UI.
Score: 8 Votes (Like | Disagree)

ignatius345
This has been my go to podcast app for a few years now. Glad to see this cool UI facelift!
Score: 8 Votes (Like | Disagree)

I'll try it out, but I recently switched to Pocket Casts, best desktop app and mobile app integration imo - Apple watch functionality etc. I was a LOOOONG time Overcast user of 5+ years.

I love Pocket Casts. It does exactly what I want and works in just the way I'd expect.

It's also been flawless running from my Apple Watch cellular. I go running 2-3 times a week and have never had an issue.