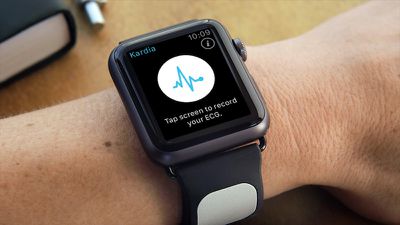 AliveCor, a company that that markets an ECG "KardiaBand" for the Apple Watch, filed an antitrust lawsuit against Apple in May 2021 accusing the Cupertino company of changing the heart-rate algorithm for the Apple Watch to gain an "unfair competitive edge" over rivals while endangering the lives of AliveCor users.

According to AliveCor, Apple's decision to exclude third-party heart-rate analysis providers from the Apple Watch has harmed AliveCor and impacted patients and consumers. To go along with the KardiaBand, AliveCor created the SmartRhythm app, which uses data from the Apple Watch's heart-rate algorithm to determine when a heart rate is irregular and suggest people take an ECG with the KardiaBand.

The KardiaBand received FDA approval in 2017, and in 2018, Apple debuted the Apple Watch Series 4 with built-in ECG capabilities and its own irregular heart rhythm notifications followed. AliveCor claims that Apple saw the success of the KardiaBand and changed the functionality of watchOS to sabotage KardiaBand and "corner the market for heart rate analysis on Apple Watch."

According to the latest report from Reuters, U.S. District Judge Jeffrey White said Monday that AliveCor could try to prove that Apple violated federal antitrust law based on its alleged "complete control" over the market for such apps.

"AliveCor alleges that Apple made changes to the heart rate algorithm that made it effectively impossible for third parties to inform a user when to take an ECG," or electrocardiogram, White wrote. "Plaintiff's allegations plausibly establish that Apple's conduct was anticompetitive."

However, White dismissed AliveCor's separate claim that Apple maintained an illegal monopoly over ECG-capable smart watches, because AliveCor's KardiaBand wristband "complements but does not compete" in that market, he said.

Apple and its lawyers have yet to respond to the judgement. AliveCor has previously filed several patent infringement lawsuits against Apple, alleging that Apple copied AliveCor's cardiological detection and analysis technology. Those lawsuits have not yet been resolved, while today's judgement allows AliveCor to seek damages and pursue the possibility of an injunction that would require Apple to cease its perceived monopolistic conduct.

Shell have announced they are sueing Tesla for making their cars run on electricity, thereby cutting Petroleum companies off from the fuel market. A Shell press release stated, "By making their automobiles charge exclusively by electricity, often from their own charge points Tesla makes it impossible for Petroleum companies to access that marketplace, effectively monopolising the fuel marketplace."
Score: 41 Votes (Like | Disagree)

PutTheFBackIn
I wonder if Apple’s legal team will wear Apple Watches to the hearings.
Score: 11 Votes (Like | Disagree)

MauiPa
So, "you make a product, I have a fundamental right to use my product with yours" Does that some it up? Does alivecor allow Apple Watch and apple products on what it makes?

I wish someone would intelligently describe the reason why any manufacturers would be required to work with any other company's products, barring a contract of course. I mean I can clearly see the appeal of it, but the legal requirement? Does my Kindle have to work with other book stores? Can we sue TV manufacturers that don't allow Airplay and Google play and Roku streaming?
Score: 10 Votes (Like | Disagree)

LeeW
My only view on this is that it is an Apple device with its own specific monitoring system and software. Not really about a monopoly but holding Apple to account for their specific device/software. I would be wary about a 3rd party trying to use it.
Score: 8 Votes (Like | Disagree)
Read All Comments

Monday October 25, 2021 3:34 am PDT by Sami Fathi
Apple's suppliers are currently developing components for next-generation sensors in the Apple Watch Series 8 that will allow users to measure their blood glucose level, according to a new report. According to a paywalled report from DigiTimes, Apple and its suppliers have begun working on short-wavelength infrared sensors, a commonly used sensor type for health devices. The new sensors,...
Read Full Article • 140 comments

Thursday December 9, 2021 10:37 am PST by Juli Clover
Every generation of the Apple Watch has a battery swelling defect that can cause operational failures and injuries from broken screens, states a new class action lawsuit that has been filed against Apple. An Apple Watch with detached display caused by swollen battery, via Shawn Miller. According to the plaintiffs in the lawsuit, Apple has manufactured the watch in a way that allows the...
Read Full Article • 102 comments