Following today's event that saw the introduction of the Mac Studio, respected Apple analyst Ming-Chi Kuo has provided some detail on the MacBook Air, another Mac product that we're expecting to see refreshed later in the year. 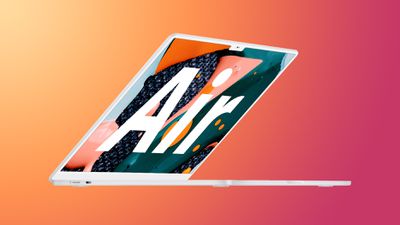 According to Kuo, the 2022 MacBook Air will have an all-new form factor design and more color options. Previous rumors have suggested the new ‌MacBook Air‌ will not have a tapered design, with Apple instead favoring a more MacBook Pro-style look.

It is expected to be thinner and lighter, and it could come in color options similar to the 24-inch iMac color options, like blue, green, pink, silver, yellow, orange, and purple. It is also rumored to feature off-white bezels and a matching off-white keyboard rather than black.

Kuo says the ‌MacBook Air‌ will feature an M1 chip, which is not in line with any of the rumors that we've heard about the machine so far.

Everything we've heard previously about the ‌MacBook Air‌ says that the machine will use an updated M2 chip with an 8-core CPU and 10-core GPU, and there have even been signs of such a chip in macOS Monterey. Despite this, Kuo has confirmed to MacRumors that he believes the next ‌MacBook Air‌ will still be an ‌M1‌ chip, although he suggests it could be a modified version of the existing ‌M1‌ that is used.

As expected, the ‌MacBook Air‌ will not feature a mini-LED display, with Apple reserving that feature for its higher-end MacBook Pro models.

Kuo says that we can expect mass production to begin on the ‌MacBook Air‌ late in the second quarter of 2022 or in the third quarter of the year.

windowsblowsass
GIVE ME iBOOK COLORS COWARDS
Score: 31 Votes (Like | Disagree)

Makes you wonder if they will bring out model below the Air, the “MacBook”

This would align with iPad category

antiprotest
MBA is the most practical for most people.
Score: 14 Votes (Like | Disagree)
Read All Comments