Consumer spending on the top 100 non-game subscription-based apps across mobile platforms grew 41% year-on-year to $18.3 billion in 2021, up from 13 billion in 2020, according to a new report from analytics firm Sensor Tower. 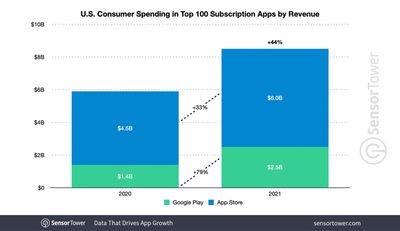 According to the data, revenue from subscription apps purchased on the App Store and the Google Play Store represented around 14% of the $131.6 billion that consumers spent on in-app purchases last year, up from 11.7% in 2020.

In the fourth quarter of 2021, however, 86 of the top 100 earning non-game apps worldwide offered subscriptions, which is actually down slightly from 87 in the same quarter of 2020.

In keeping with historical trends, spending on subscription-based apps in Apple's ‌‌App Store‌‌ was vastly more than in the Google Play Store:

Like in 2020, the only performance indicator in which the Google Play Store beat the ‌‌App Store‌‌ was in terms of year-on-year growth for U.S. user spending on subscription apps.

Consumer spending in the U.S. saw a similar breakdown, with the top 100 subscription apps generating $6 billion on the App Store, up 33 percent Y/Y from $4.5 billion. The cohort saw approximately $2.5 billion in consumer spending on Google Play, up 79 percent from $1.4 billion in 2020.

Despite the numbers, subscription-based apps generally divide ‌‌App Store‌‌ users between those for and against the revenue model. Apple began incentivizing developers to sell their apps for a recurring fee instead of a one-time cost when it made changes to its ‌‌‌App Store‌‌‌ subscription policies in 2016. Usually, Apple takes 30 percent of app revenue, but developers who are able to maintain a subscription with a customer longer than a year see Apple's cut drop down to 15 percent.

diego.caraballo
I always find deceptive this kind of analysis. Besides Tinder, all other apps that made the top 10 are streaming/service platforms. So it's not the subscriptions market growing, but more people using personal devices to watch content.
I will like to know the spending in the non-streaming apps that offer subscriptions.
Score: 6 Votes (Like | Disagree)

Why is Google One counted and Apple iCloud isn’t? Or is iCloud storage sub top 10?

bgraham
Pretty amazing how well youtube premium does... I really didn't think most people watched youtube religiously enough to pay for it...
Score: 3 Votes (Like | Disagree)

Pretty amazing how well youtube premium does... I really didn't think most people watched youtube religiously enough to pay for it...

Once you have gone ad-free, you can’t go back.
Score: 2 Votes (Like | Disagree)

Pretty amazing how well youtube premium does... I really didn't think most people watched youtube religiously enough to pay for it...

In our home we have most platforms and YT is by far the most watched. It’s the easiest one to support as that payment goes directly towards creators we watch. Unlike say, all other platforms that take the subscription money and then cancel our favorite shows.

How are you reaching that conclusion? According to the article you linked to, YouTube Premium and YouTube Music together have only 50 million subscribers but YouTube has over 2 billion active uses. That would mean less than 2.5% of users choose to pay for premium.

YTP and YTM should be the same number since the services are bundled. I wonder about the number of users though. I have 7 YouTube accounts, and I probably watch with all of them at some point each year, but >99% is on one account. I’m not sure how much can be gained. From the statistic provided.
Score: 2 Votes (Like | Disagree)

Your other questions are perceptive, but I'd bet that the vast majority of people who have a gmail account, have one gmail account. They aren't all techies like the crowd that gathers here.

I don't disagree that the MR forum isn't a representative sample of normal usage. However, given how many schools and organizations distribute Gmail accounts, I can't imagine the average number of Gmail users with multiple Gmail accounts round down to 0.

This is relevant because reports say there are 1.8 billion Gmail accounts in 2022. Two billion YT accounts would mean about 200 million people use registered for YT but don't have a Gmail account, despite being required to have a YT account.

It might be possible that millions of people actively use YT but don't have a Google account, but that makes me wonder how they are identifying unique YT users that aren't logging in. Streaming devices and smart TVs mean that more and more YT can be observed in groups, and living room viewing makes the issue harder to interpret because multiple people are now sharing a single account.

My problem with all these metrics is that they don't reliably tell us anything particularly interesting.
Score: 1 Votes (Like | Disagree)
Read All Comments