After Xiaomi pledged to aggressively challenge Apple earlier this month, Chinese smartphone brand Oppo is also now planning to directly compete with Apple on a global scale with a wave of premium devices, starting with the newly announced Find X5 (via South China Morning Post). 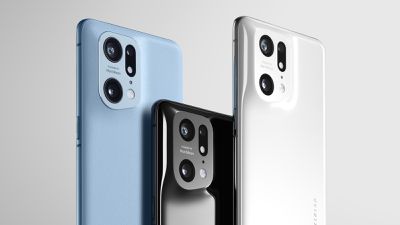 Oppo is currently the world's fourth-biggest smartphone vendor, but following its merger with OnePlus, the company reportedly has renewed zeal to create high-end smartphones that target international markets. The company is planning to use its Find series of devices and custom-designed chips to push into the premium segment that is currently dominated by Apple and Samsung, according to Zhang Zhouchuan, Oppo vice-president of overseas sales and service.

Oppo today announced its latest flagship smartphone, the Find X5, featuring the Qualcomm Snapdragon 8 Gen 1 and the company's custom-designed MariSilicon X image processor that it unveiled in December 2021. The chip is specifically designed to boost camera capabilities and improve low-light video performance. Pricing for the Find X5 series has not yet been announced, but it is expected to be among the priciest devices ever sold by the company, pitting it directly against the iPhone 13 and Galaxy S22 lineups.

Beyond the MariSilicon X image processor in the Find X5, Oppo says that it is designing other custom chips to improve specific functions, including one for improving fast charging. While the company has been hit by the global chip shortage, Zhang said that it has allocated its chip inventory to prioritize premium models in key markets and is expecting supply issues to ease in mid-2022.

Oppo anticipates that sales of its high-end models, including the Find and OnePlus series, will double year on year in 2022 thanks to rapid growth in Western Europe and South America. Like Xiaomi, the company is also seeking to fill the void left by Huawei, which was previously China's largest smartphone vendor before being forced to pull out of the U.S. market.

spazzcat
They're only directly competing with other Android phones. The last time I check, this will not be running iOS...
Score: 27 Votes (Like | Disagree)

ksgant
Cool! Does it run iOS? No? Then it's not much of a challenge, is it?

Is it a great challenger to the unbelievable plethora of different Android phones? Um...sure?
Score: 13 Votes (Like | Disagree)

doolar
I just don't see any of the Chinese phone makers competing for iPhone customers. Samsung/Android users moving up from low to mid spec phones maybe.

I hope I'm wrong - because competition is always good! But in my circles (middle age, medium to high income), I rarely see anyone with an Android phone these days, and if I do, it's always a Samsung.

We're all on iPhones, be it work or private phones, and I have a hard time seeing myself move to a Chinese brand on Android. Double spyware whammy, plus - not that I care, but I know a lot of folks do - the status of using a Chinese Android phone, they lack the desirability.
Score: 11 Votes (Like | Disagree)

The last time I check, this will not be running iOS...

Correct. Also no A series chip, or Appleverse. Chock full of Google and CCP snooping. Apple users are unlikely to be attracted to these phones, particularly not US Apple users.
Score: 9 Votes (Like | Disagree)

HiVolt
If I ever had to for some reason buy an android phone, I'd only go for a Google Pixel, and a Samsung if I absolutely had to. Never, ever a Chinese brand. Oppo, Xiaomi, Huawei, whatever...

iPhones are assembled in China as well (mostly).

The argument "everything is made in China anyway so it doesn't matter what it says on the box" is a really uneducated one. No offence.
Score: 7 Votes (Like | Disagree)
Read All Comments

Tuesday November 16, 2021 9:02 am PST by Hartley Charlton
Qualcomm today announced plans for next-generation Arm-based System on Chips (SoC) designed to rival Apple's M-series chips in the PC space (via The Verge). At Qualcomm's 2021 investor day event, chief technology officer Dr. James Thompson announced the plans for the new generation of chips. The chips are "designed to set the performance benchmark for Windows PCs" and are being developed by...
Read Full Article • 159 comments