YouTube today extended its testing period for the iPhone's picture-in-picture feature by an additional two weeks. 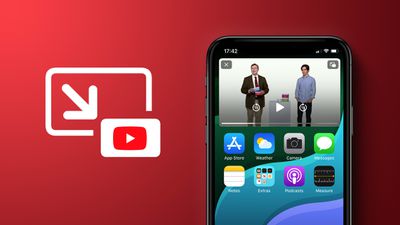 YouTube Premium subscribers now have access to picture-in-picture mode on iOS as an "experimental feature" until February 14, according to YouTube. The feature was originally set to be available until January 31, but the date has been pushed forward several times.

Picture-in-picture mode is available on iPhones running iOS 14 and later, and it allows videos to be watched while using other apps. When watching a video, users can tap the picture-in-picture button with two boxes and an arrow to move the video to a smaller window that floats over the Home Screen or other apps.

In a statement shared with MacRumors in June 2021, a Google spokesperson said YouTube planned to launch picture-in-picture for all iOS users in the United States, but no timeframe was provided for the rollout. We've reached out to Google for an update on the matter and we'll update this story if we receive any new information.

In the meantime, picture-in-picture on iOS remains exclusive to YouTube Premium subscribers. Priced at $11.99 per month in the U.S., YouTube Premium features ad-free videos, the ability to download videos, video playback when a device's screen is locked, and more.

Update: In a statement shared with MacRumors today, Google said it is "still planning to launch PiP for all users without a YouTube Premium subscription in the US," but it has no further updates to provide at this time.

We're still planning to launch PiP for all users without a YouTube Premium subscription in the US. We have no other updates to share at this time. In the meantime, we've also extended our experiment of PiP on youtube.com/new for our Premium users on iOS as we continue to test and improve the experience before launch.

jooish
Does it get any scummier than removing a free feature to charge users for it?
Score: 44 Votes (Like | Disagree)

Think|Different
Just give it to everyone. Sheesh, it is downright silly to gate this of all things. And a few months ago I did a Premium trial and was unsurprisingly disappointed to find out you couldn't even do PIP on my iPad Pro with Premium at the time – all the documentation was just for iOS for a reason. Absolutely nonsense – it's 100% about the ad consumption experience.
Score: 23 Votes (Like | Disagree)

FSMBP
A little crazy that on my 2012 MacBook Pro, I can do PIP with Safari in YouTube.

But, somehow in 2022, this is turning into a paid-feature on iOS.

Rudy69
Get Vinegar, it will force YouTube to use the built in media player....which of course supports PiP just fine
Score: 13 Votes (Like | Disagree)

It’s not for Apple to challenge them.

To each their own opinion, but an app developer impairing an iOS user's experience by gatekeeping a core OS feature behind a subscription seems like something Apple would be interested in going after.
Score: 10 Votes (Like | Disagree)
Read All Comments

Friday September 3, 2021 2:19 am PDT by Sami Fathi
YouTube says it has passed 50 million subscribers for its Premium and Music subscriptions, making it the "fastest growing music subscription" service in the world, according to YouTube's global head of music, Lyor Cohen. YouTube says that it has more than 50 million paying subscribers collectively across YouTube Premium and YouTube Music. The Google-owned service says it attributes this...
Read Full Article • 166 comments

Friday June 18, 2021 9:41 am PDT by Sami Fathi
After a long wait, YouTube for iOS is officially gaining picture-in-picture support, allowing all users, non-premium and premium subscribers, to close the YouTube app and continue watching their video in a small pop-up window. In a statement to MacRumors, YouTube says that picture-in-picture is currently rolling out to all premium subscribers on iOS and that a larger rollout to all US iOS...
Read Full Article • 352 comments

Tuesday April 6, 2021 2:55 pm PDT by Juli Clover
Popular Twitter client Tweetbot 6 was today updated to version 6.1, introducing a redesigned video player, new custom icons, and more. The app features a redesigned video player that includes Picture in Picture support, so videos playing in the app can be watched even if you swipe out of the app. A video that's playing in Tweetbot can be shifted into Picture in Picture mode by tapping on...
Read Full Article • 38 comments