If you're a regular internet user you've probably heard of popular web-based daily guessing game Wordle, created by Josh Wardle. The game, which is entirely free to play, was introduced last fall and has been spreading like wildfire. 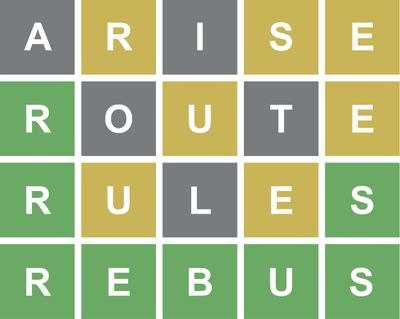 Wordle asks players to guess a five letter word by identifying which letters are in the word and are located in the right location. Players get six guesses per day, and there's a single daily puzzle for everyone.

The website for the game tracks each person's number of wins, and provides an easily shareable graphic, which has contributed to its popularity. Josh Wardle has said that Wordle will remain ad-free and unmonetized, but because it's a web app, shady iOS developers have decided to create app versions to capitalize on the game's success.

There is no official iOS-based version of Wordle available, as it exists solely on the web. Any Wordle option available through the App Store is a clone app copying the idea from Josh Wardle, and there are several clone apps climbing up the ‌App Store‌ charts at the current time.

"Wordle - The App" from developer Zach Shakked is one of the most egregious copycat Wordle apps. Shakked has created an app that uses the concepts and the design of the Wordle website, and he's charging a $30 per year subscription fee for it. Earlier today, Shakked took to Twitter to brag about how much revenue his clone app would make, and he has been buying ‌App Store‌ ads to promote it.

This guy shamelessly cloned Wordle (name and all) as an F2P iOS game with in-app purchases and is bragging about how well it's doing and how he'll get away with it because Josh Wardle didn't trademark it. So gross. pic.twitter.com/kIs8BypuRA — Andy Baio (@waxpancake) January 11, 2022

Shakked is not the only developer that has created a Wordle clone, but he appears to be the only one charging a $30 per year fee for access. Other Wordle clones are free or have much lower price tags, but again, there is no official version and Wordle players should be aware that downloading one of these apps does not support the original Wordle creator.

The #3, #7, #14, #15, and #16 best-performing word games in the app store right now are all Wordle clones that don't even change the name. It's disgusting! This guy is only unique insomuch as he's the only one bragging about it! pic.twitter.com/F3nWRI0gW1 — Greg Karber (@gregkarber) January 11, 2022

There have been previous Wordle-like games and the general concept is not new, but Shakked and other developers have stolen the Wordle name, interface, and design from Wardle rather than making a similar game with their own graphics and naming scheme.

It's unlikely that Apple is going to remove these clone apps as apps and games based on stolen ideas are nothing new for the ‌App Store‌. Many once-popular games have unfortunately been ripped off by other apps with no interference from Apple. Josh Wardle has not commented on the clone apps, and it's not clear if he'll try to get assistance from Apple.

Update: The Wordle clones have been removed from the ‌App Store‌, and the only "Wordle" apps are apps that were in the ‌App Store‌ prior to the launch of the Wordle website.

ouimetnick
I thought one of the argument for having the App Store as the ONLY WAY to get apps was to prevent scams and knockoffs like this from happening?
Score: 19 Votes (Like | Disagree)

Would be nice to see Josh issue a cease and desist to all these people and for Apple to remove all the clone apps, but I have a feeling Apple won't because they don't want to miss out on their 15% or 30% cut of sales.

Josh's idea and creation (i.e. intellectual property). All these people are infringing upon it.

Yes, the name and visual design are his intellectual property and others should be prevented from stealing it.
The game itself is not new at all and was not created by Wardle.

WestonHarvey1
Charging money?? For an app?!

Not cool stealing the name anyway. Apple should smack that down.
Score: 8 Votes (Like | Disagree)

There is no official iOS-based version of Wordle available, as it exists solely on the web. Any Wordle option available through the App Store is a clone app copying the idea from Josh Wardle, and there are several clone apps climbing up the App Store charts at the current time.

"Wordle - The App" from developer Zach Shakked is one of the most egregious copycat Wordle apps. Shakked has created an app that uses the concepts and the design of the Wordle website, and he's charging a $30 per month subscription fee for it. Earlier today, Shakked took to Twitter to brag about how much revenue his clone app would make, and he has been buying App Store ads to promote it.

Would be nice to see Josh issue a cease and desist to all these people and for Apple to remove all the clone apps, but I have a feeling Apple won't because they don't want to miss out on their 15% or 30% cut of sales.
Score: 8 Votes (Like | Disagree)

Monday August 8, 2022 10:43 am PDT by Juli Clover
With the fifth beta of iOS 16, Apple has updated the battery icon on iPhones with Face ID to display the specific battery percentage rather than just a visual representation of battery level. The new battery indicator is available on iPhone 12 and iPhone 13 models, with the exception of the 5.4-inch iPhone 12/13 mini. It is also available on the iPhone X and the iPhone XS. Battery percent...
Read Full Article • 322 comments