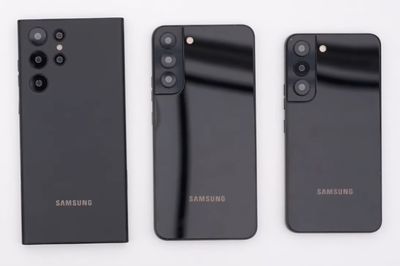 From right to left: Samsung Galaxy S22, S22 Plus, and S22 Ultra (credit: Unbox Therapy)
Now removed but since re-uploaded by others, the video pretty much confirms earlier reports that Samsung's flagship S22 and S22 Plus smartphones will sport a glossy design that retains the rounded Contour Cut Camera housing seen in the S21 and S21 Plus, while the S22 Ultra will boast a new, more rectangular Galaxy Note-style design with rear cameras that are flush with the case, and a matte finish.

According to a leaked spec sheet, the S22 will have a slightly more compact 6.1-inch display than its predecessor (6.2 inches), while the S22 Plus is expected to come in at 6.55-inches (previously 6.7-inches). Both are said to include triple-lens camera arrays featuring a 50-megapixel main camera alongside ultra-wide and telephoto lenses. (Apple plans to add a 48-megapixel camera lens to this year's iPhone 14, followed by a periscope lens in 2023, according to analyst Ming-Chi Kuo.)

Taking things up a notch, the more squared-off S22 Ultra is expected to come with four embedded cameras, including a primary 108-megapixel sensor with a Super Clear lens, which should provide reduced glare and reflections in shots, along with a 12-megapixel ultra-wide, 10-megapixel 3x telephoto, and 10-megapixel 10x periscope lens. Unlike the S21 Ultra, this year's model is also expected to come with an S Pen stylus holder built into the side.

Last year, after initially mocking Apple for not including a charger with the iPhone 12, Samsung followed its rival's lead and didn't include a charger with the Galaxy S21 series. The same is expected to apply with the S22 lineup, although Samsung is rumored to be upping the charging speed of the S22 Ultra with a separate 45W USB-C power adapter, up from the 25W maximum supported by the previous generation model.

Samsung typically announces its latest flagship smartphone lineup to rival Apple's iPhones in January or February, but there's been no confirmation of a media event yet, and given the global chip shortage and other supply-limiting factors, Samsung could well opt for a later launch this year.

TheYayAreaLiving ?
Wow! Based on the rumors and reports. Sounds like it has so much offer. The competition is good for the market. 108-megapixel camera? Sheeesh!
Score: 10 Votes (Like | Disagree)

BenLeong
Not gonna lie, it looks way nicer than than the current iPhones.
Score: 8 Votes (Like | Disagree)

Surne
Samsung has always made awesome phones (that galaxy note battery issue aside) and would probably be my first choice for a non iPhone.

Although I'm an iPhone user I've always appreciated the phones that Samsung has put out.
Score: 7 Votes (Like | Disagree)

M5RahuL
Gotta love how the self proclaimed 'Apple elitists' & *better than thou* come out tits up from the woods every time a non Apple article is posted on MR! lol..
Score: 7 Votes (Like | Disagree)

Wow! Based on the rumors and reports. Sounds like it has so much offer. The competition is good for the market. 108-megapixel camera? Sheeesh!

samsung has had 108mp camera in their galaxy for years... its kind of a gimmick cus the sensors this small can't even truly make that level of detail. Hell $6000 Mirrorless Cameras with full frame sensors are still at 48.
Score: 6 Votes (Like | Disagree)

blazerunner
What Samsung calls a 'compact' phone is a joke. The last true compact android phone was the Sony XZ1 Compact. The iPhone 13 Mini is amazing as well as a compact. Too bad there's so many Android phone manufacturers that haven't got a clue on how to make a phone that can actually fit in your pocket without sticking out like a sore thumb and making you look like a weirdo.
Score: 5 Votes (Like | Disagree)
Read All Comments