Verizon and T-Mobile have discontinued their iPad rebate program in partnership with Apple following widespread customer complaints that the program was ineffective, flawed, and rarely worked as intended. 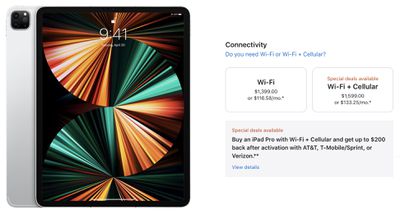 In recent weeks, complaints from customers have emerged across social media regarding Verizon's and T-Mobile's rebate programs. If it worked according to plan, the program would give customers up to a $200 rebate when purchasing a cellular ‌iPad‌ and activating through Verizon and T-Mobile. Unfortunately, customers have faced a subpar experience with the program, often reporting being denied for the rebate for unclear reasons.

The complaints have been amplified by Bloomberg's Mark Gurman, who has in the past criticized the carriers for the ineffectiveness of similar programs for the iPhone 13.

There have been several complaints regarding the ‌iPad‌ program (1, 2, 3). Nevertheless, at the start of December, a Verizon spokesperson told Bloomberg that the ‌iPad‌ rebate program was running "as it should for eligible Verizon customers."

Things have now clearly changed as Apple has scrapped all references of the program with Verizon and T-Mobile from its website, including the purchase pages for its range of iPads.

The now-removed overlay from Apple's website detailing the rebate program
Verizon and T-Mobile initiated the program following the launch of the updated iPad Pro in April. Still, the program was previously available on all cellular ‌iPad‌ models, including the new iPad mini and baseline ninth-generation ‌iPad‌.

Update: A T-Mobile spokesperson has issued a statement to MacRumors saying that the ‌iPad‌ rebate program in partnership with Apple was a limited time offer that started in April 2021 following the launch of the new 11-inch and 12.9-inch ‌iPad Pro‌. The spokesperson added T-Mobile is always looking to give its customers the "best deals on devices."

The iPad rebate with Apple was a limited time offer that has been in market since April 2021 and ended December 31. We're always looking for opportunities to give our customers the best deals on devices.

A Verizon spokesperson also confirmed to MacRumors that the offer was set to end on December 31.

Seriously though, have any of the carriers ever acted like not complete scumbags, or indicated that they have even a shred of moral or ethical consideration at their top levels of management?
Score: 15 Votes (Like | Disagree)

MauiPa
TMobile totally sucks. My daughter signed up for a trade in program for her old phones to get new ones. The program sounded great $800 per phone. She is still waiting, phone calls, emails, nada

dantracht
That is very very unfortunate for consumers. I did get a $100 discount on my new Mini 6, but that is in the form of bill credits, which I am totally cool with.
Score: 5 Votes (Like | Disagree)

Prof.
I had to fight with Verizon for about 5 months until they finally gave me my $200 rebate for my 12.9" M1 iPad Pro. One guy said 6 weeks, another gal said 12 weeks, and the final person I spoke to said 16 weeks. All in all I got my rebate in October, 5 months after the original May purchase date.
Score: 4 Votes (Like | Disagree)

Seriously though, have any of the carriers ever acted like not complete scumbags, or indicated that they have even a shred of moral or ethical consideration at their top levels of management?

Yup I stopped reading when I saw Verizon. Not surprised at all by this.
Score: 3 Votes (Like | Disagree)

georgeedwardg
In case anyone is getting crap from Verizon, here is a screenshot of the terms and conditions taken directly from their app. Please use this as necessary to justify your claims. Verizon has recently taken the cake for worst customer service in my husehold, so I’m not at all surprised to read that they are tactically going about denying proper claims.

Also, for the avoidance of doubt, the rebate in question is the $200 bring your own device rebate for devices purchased from Apple directly.