Scosche today announced the launch of a number of new products in its MagicMount product lineup, along with other MagSafe-compatible accessories like wireless chargers and speakers. 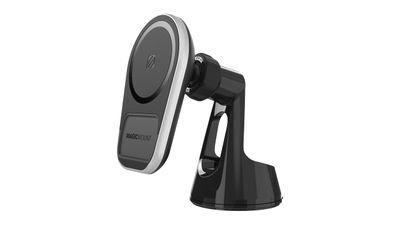 The MagicMount Pro Charge5 mounts from Scosche are compatible with Apple's MagSafe iPhones, which includes the iPhone 12 and iPhone 13 models. Scosche promises a strong hold, but it's worth noting that these are not using Apple's ‌MagSafe‌ protocol and are limited to 7.5W wireless charging.

There's a 360-degree adjustable head to allow the iPhone to be used in portrait or landscape mode, and all mounts come with a car adapter for charging and a 20W USB-C charging port for when faster charging is needed.

Scosche is also introducing MagSafe-compatible speakers and wireless chargers. The $40 BoomCanMS Portable is a small, Bluetooth-enabled speaker that's designed to adhere to the back of a ‌MagSafe‌ ‌iPhone‌. The ‌MagSafe‌ technology doesn't add anything for sound, but it does keep the speaker from becoming lost and it also doubles as a kickstand.

The larger $130 BoomBottle Magnetic Portable Speaker allows the ‌iPhone‌ to be attached to the top for easy access to streaming music, hands-free calls, and more. Both new speakers are set to launch later in 2022.

The BaseLynx MS Wireless Stand for ‌MagSafe‌ Charger is set to launch in spring 2022 for $50.

Moonlight
I want to put my phone in my pocket, magsafe that little speaker to my phone through the cloth to the outside of my pants, and walk down the street listening to Bell Biv Devoe
Score: 5 Votes (Like | Disagree)

LeadingHeat
Someone on the design team is getting fired ?

ShaneReactions
I cannot find a decent magsafe car cupholder to save my life. The layout of my car really only allows for something in the cupholder, plus it's a very convenient place for me to access the phone if needed. But the couple they have on Amazon are really cheap with bad reviews. Are car cupholders that unpopular?
Score: 2 Votes (Like | Disagree)

macduke
Is there a MagSafe car mount yet? Tired of all these companies putting out old slow tech! This is why I wish I had a 3D printer so I could just print a ball mount for my existing arm and pop one of my MagSafe pucks into it. Maybe I'll buy myself one for my birthday.
Score: 2 Votes (Like | Disagree)

Yah
They make one. I wonder if it's any good.

BTW, if you leave their site without ordering anything, they pop up a DONTGO15 discount code for 15% off.

Scosche is a pretty good company. I have their AC vent mounts and they work great! Thanks for posting this.
Score: 2 Votes (Like | Disagree)

_Spinn_
I’m honestly shocked that there hasn’t been a flood of MagSafe accessories since the release of the iPhone 12.
Score: 2 Votes (Like | Disagree)
Read All Comments

Tuesday January 18, 2022 4:06 pm PST by Juli Clover
Apple accessory maker Mophie this week debuted its newest product, a MagSafe-Compatible 3-in-1 Travel Charger that can be purchased directly from Apple's online store. The fold-up 3-in-1 Travel Charger has dedicated spaces for charging the iPhone, Apple Watch, and AirPods. It is listed as a MagSafe-compatible charger, but Mophie says that it's Made for MagSafe certified and is able to charge ...
Read Full Article • 51 comments

Deals: Save Up to 30% on Apple's MagSafe Charger Accessories for Your iPhone 12 or iPhone 13

Wednesday September 22, 2021 7:25 am PDT by Mitchel Broussard
A pair of solid deals on Apple's MagSafe Charger and MagSafe Duo Charger are still live at Amazon and Verizon, respectively. We first began tracking these all-time low prices one week ago, and it's a great time to buy them now at these prices, ahead of the iPhone 13 launch on Friday. Note: MacRumors is an affiliate partner with some of these vendors. When you click a link and make a purchase,...
Read Full Article • 17 comments

Fake MagSafe Accessories Might Be a Bargain, But Watch Out for Shortcomings

Monday March 29, 2021 2:17 pm PDT by Juli Clover
Apple accessories like watch bands and cases are often imitated by companies who want to make a quick buck fooling customers, and the new MagSafe charging line is no exception. There are dozens of fake MagSafe and MagSafe Duo chargers out there that consumers need to watch out for. Subscribe to the MacRumors YouTube channel for more videos. Over on our YouTube channel, MacRumors videographer...
Read Full Article • 56 comments

Wednesday July 14, 2021 2:21 pm PDT by Juli Clover
ElevationLab, known for its range of useful accessories for Apple's devices, today introduced the MagBase, which is designed to increase the functionality of Apple's MagSafe Charger. Priced at $9.95, the MagBase is a small attachment that fits onto the MagSafe Charger. It has a micro air suction surface at the bottom, which ElevationLab has used in prior products. This micro air suction is...
Read Full Article • 49 comments