Disney today announced that it has updated its Disney+ app with support for SharePlay across the iPhone, iPad, and Apple TV, as reported by TechCrunch. 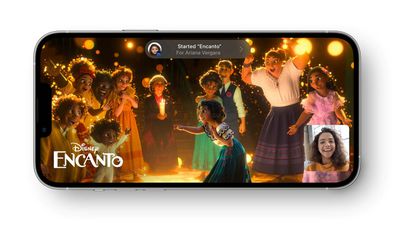 SharePlay allows users running iOS 15.1, iPadOS 15.1, tvOS 15.1, or later to watch Disney+ series and movies in sync with friends and family while on a FaceTime call together. Disney said SharePlay is available globally for the entire Disney+ catalog of content from Disney, Pixar, Marvel, Star Wars, National Geographic, and more.

Once everyone has joined the FaceTime call, any user can start SharePlay by opening the Disney+ app and tapping play on the content that you want to watch. SharePlay sessions offer shared playback controls like play, pause, fast forward, and rewind.

SharePlay sessions can include up to 32 people and offer each participant in the FaceTime call the ability to choose audio and subtitles in their preferred language, Disney said in a press release announcing the update. Disney also said its native GroupWatch co-viewing feature will continue to be available globally to subscribers.

SharePlay support requires the latest version of the Disney+ app that is rolling out now on the App Store for the iPhone, iPad, and Apple TV. SharePlay is also available on the Mac starting with macOS 12.1, but Disney+ does not offer a Mac app.

utsava
Do all people on the FaceTime call need to have a subscription to the service that you are sharing? How does this work?
Score: 10 Votes (Like | Disagree)

kab695
I am surprised this SharePlay is a thing. I do like watching TV with family in the TV-room; there is a shared experience to that. Yet, I will be surprised if this feeling translates over SharePlay.
Also, when we're hanging out in the TV room, we're shouted or laid back in our recliners, and that's just part of the feel and the look that no one registers. But when on FaceTime or Zoom and with a head-shot of us showing live, we usually care what we look like, how our smiles and reactions come across. I don't want to care about that for a two hour movie that someone is watching miles away the same time I am watching it. So, ...it is worth a try, but...
Score: 2 Votes (Like | Disagree)

I can. Some people enjoy having others ruin a show for them by talking during the dialogue or making snarky comments during the show. And then there are the (_!_) who like to ruin shows for people that way. They'll love using SharePlay.
I would never use SharePlay. Unless I'm watch MST2K, I don't want commentaries while I'm watching my show. A jury of my peers would acquit me for justified homicide.?
Score: 2 Votes (Like | Disagree)

This is great news! Is there a list of apps that support SharePlay yet? Is HBO (Max) on that list?

Monday July 12, 2021 2:16 pm PDT by Juli Clover
Disney today told subscribers that it is raising the price for its ESPN+ standalone streaming service. Starting on August 13, the monthly price will increase from $5.99 to $6.99, and the yearly price will increase from $59.99 per year to $69.99 per year. Prices for UFC pay-per-view matches will remain unchanged, and the bundle that includes Disney+, Hulu, and ESPN+ will not be increasing....
Read Full Article • 74 comments