"Loose" interpretations of Apple's privacy policies allow apps such as Facebook and Snapchat to continue tracking users for targeted advertising even when they have asked to not be tracked, The Financial Times reports. 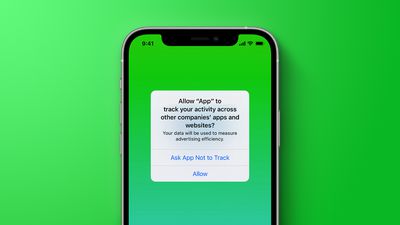 In May, Apple launched its App Tracking Transparency feature that allows users to opt-out of being tracked across apps and websites for advertising purposes. Seven months after Apple introduced the feature, companies such as Snapchat and Facebook have purportedly been allowed to continue sharing user-level signals from iPhones, providing that data is anonymized and aggregated rather than directly linked to specific user profiles.

The Financial Times said that Apple's position was the result of "an unacknowledged shift that lets companies follow a much looser interpretation of its controversial privacy policy." Apple has instructed developers that they "may not derive data from a device for the purpose of uniquely identifying it," which developers have interpreted to mean that they can still observe "signals" and behaviors from groups of users instead, enabling these groups to be shown tailored ads anyway.

Apple has not explicitly endorsed these techniques, but they allow third parties to track and analyze groups of users regardless of whether or not they have given consent to user-level tracking. In addition, Apple reportedly continues to trust apps to collect user-level data such as IP address, location, language, device, and screen size, even though some of this information is passed onto advertisers.

Snapchat investors were told that the company plans to share data from its 306 million users, including those who ask the app "not to track," with advertisers so that they can gain "a more complete, real-time view" of the success of ad campaigns. Likewise, Facebook is undertaking a "multiyear effort" to rebuild ad infrastructure "using more aggregated or anonymized data," according to the company's operations chief.

In June, Apple faced pressure to tighten the rules around App Tracking Transparency after it was found that third parties were using workarounds to identify users who do not consent to be tracked, but there have been no changes around looser "probabilistic" methods of user identification.

PBG4 Dude
It’s crap like this that’s stopped me from using apps. I’m more and more just browsing 100% in incognito mode so no cookies are ever saved. I’ve also stopped using FB and insta altogether but that’s a different topic.
Score: 53 Votes (Like | Disagree)

antiprotest
So on Apple devices even explicit privacy features might give only a false sense of security. Apple is getting looser and looser on privacy and security, and continuing to add self-sabotaging features like CSAM.

Wouldn't be surprised to hear one of these days that Apple has been selling private data of a billion users, only that they have a different interpretation of what is "selling" or "data" or "private" or "user".
Score: 29 Votes (Like | Disagree)

imDavid
So does that mean when Facebook cried to the public about Apple blocking tracking, that it was all a ruse?

contacos
That’s why I deleted the Instagram app and only use the web version with a Home Screen favorite. Perks? No ads and no stupid shopping icon! Thanks to my Adblocker. You can barely tell it isn’t the App either. The only downside is the limited photo upload functionalities for stories
Score: 17 Votes (Like | Disagree)

mookc1
I use neither of the apps, but I'm sure there are others. Apple needs to continue to tighten this up.
Score: 17 Votes (Like | Disagree)

TechRunner
I've resigned myself to the fact that, when I'm online, someone is tracking/monetizing it in some way. Having said that, I've dumped FB, IG and others to reduce the amount of tracking taking place.

Tor run through a VPN is looking better every day.
Score: 13 Votes (Like | Disagree)
Read All Comments