iOS 15 is meant to include several new features for the Wallet app, including support for car keys, hotel keys, HomeKit house keys, and IDs. Many of the features have yet to roll out, but as of today, Apple Wallet will begin supporting hotel keys. 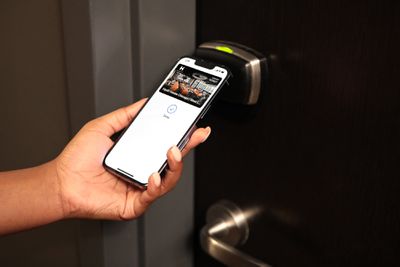 Customers at participating hotels will be able to add a room key to the Wallet app and then tap their iPhone or Apple Watch to unlock their rooms and common areas like gyms, pools, and elevators. Adding a key to Apple Wallet requires iOS 15, and it also works with an Apple Watch running watchOS 8.

Guests can hold their device near the door's NFC-enabled lock to access key card-protected areas, and with the Express Mode, an ‌iPhone‌ does not need to be unlocked to use the room key. Should their ‌iPhone‌ run out of battery, the Power Reserve feature allows it to continue to be used for unlocking the door for up to five hours.

According to Hyatt, members are able to add their room key to Apple Wallet after placing a reservation, and the wallet entry will let them know when check-in time arrives. When the guest is at the hotel and the room is ready, the Apple Wallet key will activate. The hotel can remotely update the guest's room key in Apple Wallet should a room change be needed, and when checking out, customers can do so through the Hyatt app, which deactivates and archives the key stored in Apple Wallet.

While the Apple Wallet key technology is being tested at just six locations right now, Hyatt expects it to roll out across all global properties in the future.

icanhazmac
Been doing this at Hilton properties for a couple of years via their app.
Score: 10 Votes (Like | Disagree)

Yeah, same here, but I'm guessing it won't be mandatory to have the specific hotel app. I guess.

Exactly. Having this in Wallet rather than going to an app is much smoother and saves time as you don’t have to unlock your phone, click on app, and click to unlock. Hopefully Hilton catches up to Hyatt.
Score: 7 Votes (Like | Disagree)

jz0309
I could be wrong cause I havn't traveled in like 2 years, but I think that Hilton offered that within their app like 3 year ago?
Score: 5 Votes (Like | Disagree)

827538
Looking forward to having my house key, car key, and drivers license on my phone and watch. Will save me from having those things in my wallet.

Perfect for the beach, gym, or hiking and one less thing to lose.
Score: 5 Votes (Like | Disagree)

TheYayAreaLiving ?
Very nice. This will come in handy.
Score: 5 Votes (Like | Disagree)

Been doing this at Hilton properties for a couple of years via their app.

Yeah, same here, but I'm guessing it won't be mandatory to have the specific hotel app. I guess.
Score: 4 Votes (Like | Disagree)
Read All Comments