Apple has today shared a press release celebrating the best and most popular podcasts of 2021, as curated by the Apple Podcasts editorial team. 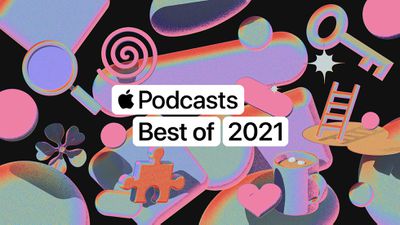 Apple named "A Slight Change of Plans" with Maya Shankar as "Best Show of the Year." The show combines storytelling with cognitive and behavioral science to help listeners navigate change in their lives, including real-world stories about change when navigating the foster care system and undergoing medical treatments. A Slight Change of Plans features conversations with Riz Ahmed, Kacey Musgraves, Tommy Caldwell, and more.

"Anything for Selena" with Maria Garcia has been awarded "Newcomer of the Year." The show explores Latino fatherhood, belonging, identity, and language through storytelling and cultural analysis.

In addition to Best Show of the Year and Newcomer of the Year, Apple recognized a large number of shows and episodes that have "defined and reflected" 2021:

For more information about Apple's nominations and the top new shows, free channels, and subscriptions in ‌Apple Podcasts‌, see the full press release.

DMG35
Ironically Apple also was celebrated for having the worst podcast app.

What is wrong with the Podcasts app?

In my experience, it's fluid, reliable, and syncs beautifully across all my Apple devices. It is everything I could possibly desire in a podcasting application.

I’m assuming you don’t use other apps, so you don’t realize how ridiculously god awful Apples is.
Score: 2 Votes (Like | Disagree)

H3LL5P4WN
No A Hotdog Is A Sandwich?

It's also handcrafted ad not really based on statistics as the award and article would lead you to believe.
Score: 1 Votes (Like | Disagree)

TheYayAreaLiving ?
They need to work on the app first before they can give out the awards come on.
Score: 1 Votes (Like | Disagree)
Read All Comments