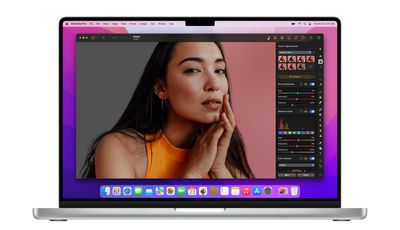 In a blog post announcing the update, Pixelmator's developers say that it's now possible for users to "magically" remove the background from any image with just a click. The new feature is based on machine learning models that can find a subject in almost any image and automatically strip out the background, and it's also available in Finder as a built-in Quick Action.

Building on the same set of machine learning algorithms is Automatic Subject Selection, which allows users to make a selection of the subject of any image with just a click. Meanwhile, a new Select and Mask tool makes it easier to select difficult areas of subjects like hair, fur, and other objects with complex edges.

The Smart Refine feature has also been redesigned to enhance selection accuracy, and a new Refine Edge Brush lets users brush over particularly tricky edges to get the selection they want.

These new features are powered by ML algorithms that are integrated into Pixelmator Pro using Core ML, which makes them "absolutely fly" on the latest M1-powered devices thanks to their overall speed and the Apple Neural Engine, according to the developers. For example, background removal takes around 2-5 seconds on M1 devices and up to 30 seconds on Intel devices for an average image.

The update includes some smaller changes, like the ability to specify custom export sizes and scales in the Export dialog. More details are available in the release notes. Version 2.3 is free for existing Pixelmator Pro users, and there's currently a 50% discount off the app price (usually $39.99) in the Mac App Store.

AFPoster
Love this update so far! Thanks Pixelmator for investing time and talent to creating an innovative product that destroys Photoshop.
Score: 11 Votes (Like | Disagree)

joshwenke
Pixelmator is an incredible app. Not only is it powerful and can handle projects fit for Photoshop, it's intuitive and combines everything I love about Mac and UI and graphic design.
Score: 10 Votes (Like | Disagree)

H3LL5P4WN
I don't know why anyone would buy into Adobe when Pixelmator exists.

(Provided you don't need the rest of Adobe's ecosystem, of course.)
Score: 9 Votes (Like | Disagree)

the graphic program looks very good and at a great price!

I'd recommend "Affinity Photo" instead if you need anything similar to Photoshop.
Score: 6 Votes (Like | Disagree)

I don't know why anyone would buy into Adobe when Pixelmator exists.

(Provided you don't need the rest of Adobe's ecosystem, of course.)

I'm asking myself the same thing.
It's basically the price of 1-2 months of Photoshop, except that you own it and you have it forever.
Score: 5 Votes (Like | Disagree)
Read All Comments