Apple has furthered its research on devices with all-glass enclosures, a newly granted patent filing shows. 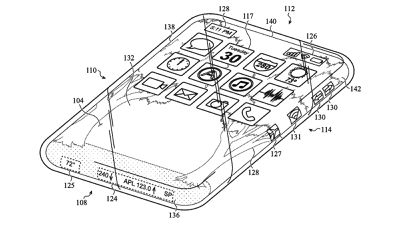 The patent, first spotted by Patently Apple, is titled "Electronic device with glass enclosure" and was granted to Apple by the United States Patent and Trademark Office earlier today. The research focuses on electronic devices with six-sided glass enclosures and glass casings that extend all of the way around a device.

For devices such as the iPhone, Apple's patent covers how touchscreen displays are enclosed "within the interior volume and positioned adjacent at least a portion of each of the six sides of the six-sided glass enclosure." These displays are flexible to accommodate the internal curves of the enclosure and can provide additional touch input regions.

The patent explains how glass may be curved, tapered, and overlapped to create an all-glass enclosure, featuring accommodations for components such as speakers and microphones. Apple also suggests that some of the glass surfaces may feature different textures to differentiate them from nearby input regions.

Apple outlined various implementations for allowing access to the device's internals, presumably for manufacturing and repairs, such as by removing a window or what Apple calls a "cap" section. This would allow internal components to be slid out in a way that is similar to the latest Apple TV's Siri Remote.

The filing also shows how the device's software could integrate with an all-glass design to dynamically adapt based on how the user holds and orients the device, such as additional information being shown on the outer edges and UI elements that move around to the surface being interacted with.

Beyond the ‌iPhone‌, which appears to be the main focus of the patent, the filing also demonstrates how other devices, such as the Apple Watch, a cylindrical Mac Pro, and a ‌Mac Pro‌ tower, could feature all-glass enclosures and utilise their internal surfaces.

Devices with all-glass enclosures have long been idealized by some, including former Apple designer Sir Jony Ive, as the natural conclusion of Apple design. Apple's patent filings do not demonstrate the company's immediate plans, but they do show some of the company's specific areas of research and development.

The Apple Watch Series 7 features an all-new, thicker front crystal. Combined with larger display sizes, the refractive curved edge of the Apple Watch's glass gives the impression of the display almost meeting the casing, in what may be a small iteration toward reaching the sort of design envisioned in this filing.

Fusionskies
All the ergonomics of a bar of soap ?
Score: 24 Votes (Like | Disagree)

SamRyouji
All glass? Even with Gorilla Glass Victus, that will still be as fragile as my heart...
???
Score: 6 Votes (Like | Disagree)

dantracht
As if I wasn’t afraid enough of breaking mine…..
Score: 5 Votes (Like | Disagree)

audiophilosophy
I would trade the glass back with contact charging for an aluminum back without contact charging any day. The iPhone 5 series was so wonderfully light because of the choice of aluminum instead of glass. I wonder how much lighter my 13 mini could be if it didn’t have a glass back, magnets in it for MagSafe, and the copper inductive charging coil (and 5g antenna too since I don’t use 5g due to battery drain).
Score: 5 Votes (Like | Disagree)
Read All Comments