HYPER today announced the launch of its latest dock, a 15-port version that is designed for the 13, 14, 15 and 16-inch MacBook Pro models. The HyperDrive 4K Multi-Display Docking Station supports up to three 4K displays on larger Mac machines. 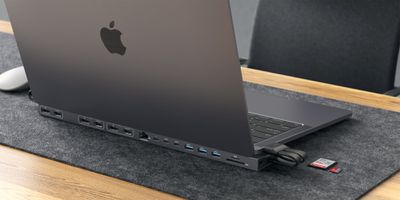 With the trio of HDMI ports and DisplayPort ports, dock users can create a three-display setup using any combination of ports. The HyperDrive Dock connects to the MacBook with three USB-C cable. One cable connects to 11 ports, including an HDMI/DisplayPort, while connecting an additional one to two cables enables one to two more HDMI/DisplayPort ports. For all 15 ports to be active, all three cables must be connected.

The dock itself is made from an aluminum material and it is sized to fit underneath the chassis of a MacBook Pro. HYPER says that this design offers ergonomic benefits and dissipates excess heat from the laptop.

HYPER is actually using a two-part modular approach for the HyperDrive. For 13 and 14-inch MacBook Pro models, the main part of the dock comes with 13 ports, including two HDMI and DisplayPort ports.

For 15 and 16-inch MacBook Pro models, there is a magnetic extension that adds an additional DisplayPort and HDMI port for triple display functionality. According to HYPER, the complete 15 ports and support for three full 4K displays is limited to the larger 15 and 16-inch MacBook Pro models that have the bandwidth to support it, with more information available through the Indiegogo campaign.

HYPER says that the HyperDrive works with any version of the USB-C MacBook Pro, supporting models from 2016 to 2021, as well as Windows PCs, Chromebooks, and more.

Note: MacRumors is an affiliate partner with Indiegogo. When you click a link and make a purchase, we may receive a small payment, which helps us keep the site running.

ghanwani
I want to be surrounded by displays so I can live the in metaverse without a head set.
Score: 21 Votes (Like | Disagree)

KhrisGarcia
Dock has a million ports but in product shots only using two cables out the back. If you actually loaded this thing up it would be a mess on your desk. I prefer one wire that goes to a dock towards the back of the desk with all the wires completely out of the way.
Score: 13 Votes (Like | Disagree)

Tagbert
"fit underneath the chassis of a MacBook Pro. HYPER says that this design offers ergonomic benefits"

It's strange that people still promote the idea that tilting the keyboard up is actually ergonomic. Instead it puts strain on your wrists in exactly the wrong direction. In this case the effect is probably minimal but calling it ergonomic is a misnomer. I guess this is a strategy to pretend that a downside is actually an upside.
Score: 12 Votes (Like | Disagree)

likegadgets
My usual warning - BEWARE of Hyper. Do your research on MacRumor forums.
Score: 9 Votes (Like | Disagree)

torontotim
Why would anyone want a dock physically matched to the MacBook with a clumsy heavy short cable?

I have a simple Thunderbolt dock that connects with a single cable that does everything, and it's stashed out of sight with all my cables running to it.

With this setup you end up with a massive mess of cables sitting on your desktop. And this image is nutty - WTF use case is this? Open the screen to use the keyboard and obscure a screen? Or no keyboard?

Bunch of dummies with 3D renders rushing to crowdfund their projects. 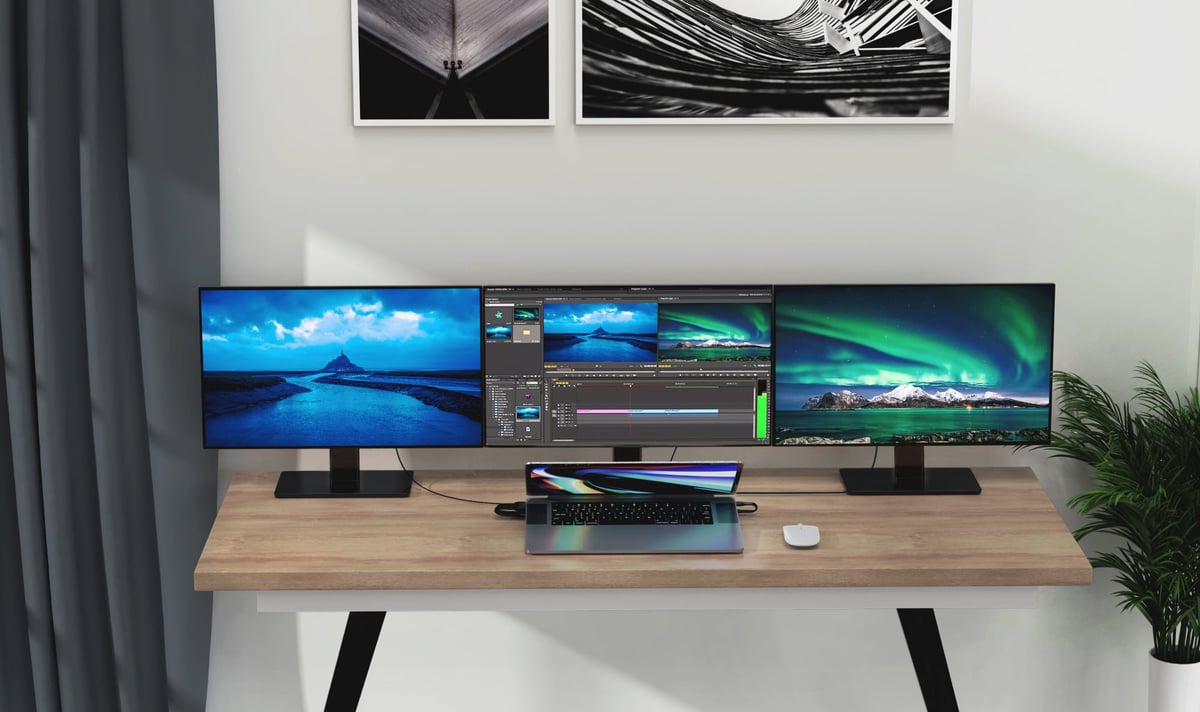 arobert3434
THREE USB/C cables?! Maybe someone should tell these guys about Thunderbolt.
Score: 3 Votes (Like | Disagree)
Read All Comments

Tuesday October 12, 2021 8:03 am PDT by Joe Rossignol
Hyper today announced the release of ">two new HyperDrive hubs that allow M1 models of the MacBook Air and 13-inch MacBook Pro to connect to two 4K displays over HDMI in a plug-and-play manner with no drivers required. There is a 3-in-1 version of the hub with two HDMI ports and a USB-C Power Delivery port for up to 100W of pass-through charging, and a 10-in-1 version of the hub that offers...
Read Full Article • 24 comments

Friday March 25, 2022 6:46 am PDT by Mitchel Broussard
Amazon today has the 14-inch MacBook Pro with the M1 Pro/10-core CPU/1TB SSD for $2,249.00, down from $2,499.00. This sale is only available in Silver, and the notebook is shipped and sold directly by Amazon, with stock available today. Note: MacRumors is an affiliate partner with some of these vendors. When you click a link and make a purchase, we may receive a small payment, which helps us...
Read Full Article • 16 comments

Thursday September 29, 2022 12:38 pm PDT by Juli Clover
Tony Blevins, Apple's vice president of procurement, is set to depart the company after he made a crude comment about his profession in a recent TikTok video, reports Bloomberg. Blevins was in a video by TikTok creator Daniel Mac, who was doing a series on the jobs of people he spotted with expensive cars. After seeing Blevins in an expensive Mercedes-Benz SLR McLaren, Mac asked Blevins what ...
Read Full Article • 751 comments