Netflix today announced the full official rollout of its Netflix Games feature, which will allow Netflix users to play a handful of games on their mobile devices. 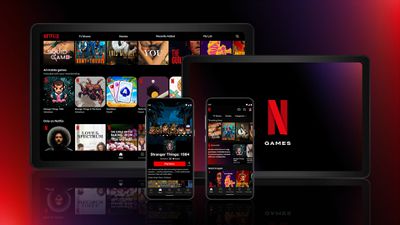 At the current time, Netflix is making games available for Android users, but support for iOS is "on the way." Netflix says that it's early days, but its goal is to build a library of games offering "something for everyone."

🎮📱 Let the Games Begin📱🎮 Tomorrow, Netflix Games will start rolling out on the Netflix mobile app. First on Android, with iOS on the way. It’s early days, but we’re excited to start bringing you exclusive games, with no ads, no additional fees and no in-app purchases. pic.twitter.com/ofNGF4b8At — Netflix Geeked (@NetflixGeeked) November 2, 2021

Accessing games on Netflix requires a Netflix subscription, and there are no ads, additional fees, or in-app purchases, which is how Apple's gaming service, Apple Arcade, operates. Android users will now see a dedicated games row and games tab in the Netflix app, and will be able to select games to download and play.

It's not clear how the iOS version of the app will work. Netflix can have a "catalog" app like its main Netflix app (or a separate Games app) that lists gaming titles, linking out to games that can be downloaded from the App Store. Alternatively, Netflix can use a web-based solution, but games would need to be streaming titles.

Netflix says that it will continue to improve the mobile gaming experience in the coming months, but there is no word yet on when Netflix's games will come to iOS devices.

DinkThifferent
I cannot wait to aimlessly scroll around Netflix Games and then decide to play nothing at all.
Score: 61 Votes (Like | Disagree)

You don’t think it’s a wee bit disingenuous to conflate “all the money Apple makes on games in the App Store” with “Apple Arcade”?

Apple Arcade is way too good.

Apple Arcade is pretty much a flop!
Score: 19 Votes (Like | Disagree)

Apple's profit from the App store games represents a lot more than the revenues associated with Apple Arcade. ;)
Score: 16 Votes (Like | Disagree)

The Cappy
And I just recently got a notice that my subscription fee is going up again. Apparently "It's included in the price" means everybody will be paying for it, whether they want it or not.
Score: 14 Votes (Like | Disagree)
Read All Comments