Google Photos users on iPhone and iPad will soon be able to lock their most sensitive images in a special passcode-protected folder, thanks to a new feature coming to the iOS app (via The Verge). 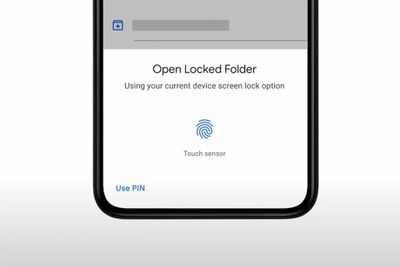 Currently exclusive to Pixel phones, the privacy-oriented Locked Folder feature allows users to save photos and videos in the app within a separate space that requires a passcode or fingerprint to access.

Media saved in the folder remains hidden, meaning the sensitive photos don't show up as users scroll through their Google Photos or any other apps on their device. Google says the feature is coming to iOS "early next year."

Importantly, at least as it currently works on Pixel Phones, any cloud backups of items placed in the Locked Folder are automatically deleted from Google's servers.

Google touts its photo and video backup service as "a safe home for life's memories," thanks to the "world-class security" and encryption it uses "to protect the photos that you back up or share."

Despite those safeguards, last year Google was forced to contact some 100,000 users to inform them that some of their private videos backed up on its servers had been accidentally sent to strangers due to a "technical issue."

Apple still doesn't offer an equivalent feature is its native Photos app for iOS. It does include an option to hide certain photos from the main library in a "Hidden" folder which can be literally hidden in the Photos app, but even so, the album can still be seen when the image picker is used in third-party apps, so it's not completely invisible from prying eyes.

contacos
Been waiting for this for years on iOS. I do not understand why there isn't a system wide integration to lock any app with a toggle
Score: 42 Votes (Like | Disagree)

Apple is sometimes extremely late to the party. I'm not sure if we will ever get that. Another one that would be nice is a legitimate internal firewall for blocking anything we like.

Literally these “Focus” features on iOS 15 were available as “Profiles” on my Sony Ericson 15 years ago.
Score: 11 Votes (Like | Disagree)

svenning
Why the hidden photos folder on iOS is not lockable (or locked by default) makes zero sense to me.
Score: 10 Votes (Like | Disagree)

Been waiting for this for years on iOS. I do not understand why there isn't a system wide integration to lock any app with a toggle

Apple is sometimes extremely late to the party. I'm not sure if we will ever get that. Another one that would be nice is a legitimate internal firewall for blocking anything we like.
Score: 8 Votes (Like | Disagree)
Read All Comments