When Apple unveiled the new MacBook Pro models with a notch to house the camera in the thinner display bezel, many observers pointed out potential problems for third-party apps that place additional content across the menu bar, in the form of dropdown menus that extend from the left or menu items that extend from the right. 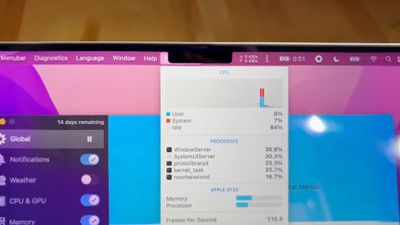 The concern was that extended menus or menu items in the menu bar would be inadvertently hidden behind the notch. Based on new video evidence, that at least appears to be the case for non-updated apps that make extensive use of menu items, but not the case for apps that have extended dropdown menus.

Snazzy Labs YouTuber Quinn Nelson shared two videos on Twitter bemoaning the impact that the notch has on versions of two third-party apps that have not been updated to make way for the notch. In the first video, menu bar items for popular app iStat Menus are shown as being partially concealed behind the notch but still accessible using the mouse pointer.

By contrast, in the second video, when Nelson launches an old version of DaVinci Resolve, he discovers that the video editing app's extended dropdown menus avoid the area of the menu bar concealed by the notch, and that the mouse pointer is blocked from entering the concealed space.

In the second video, Nelson goes on to complain that the notch is causing DaVinci Resolve's extended menus to take over the menu items of iStat Menus on the right-hand side of the menu bar. This is actually normal behavior in macOS running on any Mac, but the notch does reduce the amount of menu bar space available for both sets of content.

Monterey ensures that app menus are shown on either side of the notch by using a new "compatibility mode" that disables the active display area taken up by the camera housing. For what it's worth, Bjango, the developer of iStat Menus, doesn't believe that adding compatibility mode support to their app would change the behavior of the app's status items when other apps are in the foreground and isn't likely to solve the issue presented in the video.

robertts
I don't understand why this isn't handled at the system level. So, every Mac app needs to engineer a solution for the notch?
Score: 44 Votes (Like | Disagree)

Your Royal Highness
OK it’s a legitimate concern but that guy and his annoying crackle is ??
Score: 44 Votes (Like | Disagree)

macpot
The guy is sooo excited like he discovered a new kind of atom or something... ?

This can be fixed in the next "Minor" update!
Score: 32 Votes (Like | Disagree)

Wiesenlooser
It's valid criticism that needs to be fixed but the guy is super obnoxious.
Score: 31 Votes (Like | Disagree)

Max Webb
I get the issue, but it's not the end of the world, it will just take a small software fix to change how it works.
Score: 30 Votes (Like | Disagree)
Read All Comments

Wednesday October 27, 2021 3:54 am PDT by Tim Hardwick
If you bought a new MacBook Pro and you're having a hard time acclimatizing to the notch at the top of the screen in the middle of the menu bar, there's an app for that. The inclusion of a display notch on the redesigned MacBook Pros was a surprise to most observers and was one of the few last-minute rumors that surfaced ahead of their unveiling. Some have since criticized Apple's design ...
Read Full Article • 201 comments

Wednesday October 27, 2021 9:15 pm PDT by Joe Rossignol
Apple today shared a new support document that explains how users can ensure that an app's menu bar items do not appear hidden behind the notch, or the "camera housing" as Apple calls it, on the new 14-inch and 16-inch MacBook Pro models. In the support document, Apple says users can turn on "scale to fit below built-in camera" for an app to adjust the active area of the display, ensuring...
Read Full Article • 155 comments