If you bought a new MacBook Pro and you're having a hard time acclimatizing to the notch at the top of the screen in the middle of the menu bar, there's an app for that. 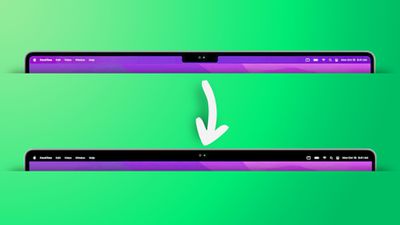 The inclusion of a display notch on the redesigned MacBook Pros was a surprise to most observers and was one of the few last-minute rumors that surfaced ahead of their unveiling.

Some have since criticized Apple's design choice of adding a notch, but Apple has pushed back against criticism by saying that it's a "smart way" of giving users more room for their content, because it allowed the bezels to be made thinner for added screen real estate.

If that logic doesn't pass your scrutiny, the following apps are available. While they don't outright cancel the notch, they at least make its existence less obvious by forcing a black menu bar, similar to how macOS Monterey adds a black bezel to the top of the display when apps are in fullscreen mode, only by adapting your chosen wallpaper instead, like so.

Forehead (free): Besides letting you switch between your default wallpaper and a black notchless one, Forehead includes options to round the corners of the screen, similar to the rounded top corners of the new MacBook Pros. The ability to simulate a notch on older Macs is coming in an update.

TopNotch (free): Offers the same features as Forehead, and also supports Dynamic Wallpapers, works with multiple displays and spaces, and remains in the background and detects for wallpaper changes.

De-Notch-ifier (€9.95): Offers the same features as TopNotch, just in the form of a dropdown menu in the menu bar. De-Notch-ifier isn't a completely new app, rather it's a pre-configured version of Boring Old Menu Bar that gives you a boring old non-transparent menu bar on macOS Big Sur and later. If you buy one app, you get the other for free.

Own a new MacBook Pro? What do you think of the notch now that you've spent some time with it? Let us know in the comments.

sniffies
Honestly, much ado about notching
Score: 44 Votes (Like | Disagree)

Havalo
There's an easier solution, go with the previous gen and also save lots of bucks. Win-win... :)
Score: 25 Votes (Like | Disagree)

TComm
The notch is not a feature, it is a compromise. Very sad what Apple is becoming.
Score: 24 Votes (Like | Disagree)

contacos
I tried one of them but I actually prefer the notch. Seeing the black bar at all time makes the screen appear smaller for some reason. Trick to the brain?maybe because this way you will have the actual bezel + the black „digital bezel“ from the menu bar so it ends up looking like one big bezel. I prefer seeing the wallpaper behind the menu bar

ProfessionalFan
Just use the computer and you will quickly realize the notch is a complete non-issue.
Score: 22 Votes (Like | Disagree)

frifra
But are these apps top-notch?
Score: 18 Votes (Like | Disagree)
Read All Comments