Multiple benchmarks have already given us a general estimate of the CPU performance of the M1 Max chip, but we've had little insight into GPU performance. The ‌M1 Max‌ is equipped with up to 32 graphics cores, marking a vast improvement over the 8-core GPU of the M1, which was Apple's first chip. 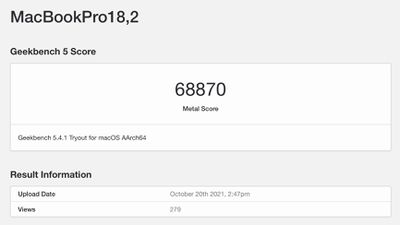 The first Metal benchmark for the ‌M1 Max‌ surfaced this afternoon, with the chip earning a score of 68870. Comparatively, the ‌M1‌ chip in the 13-inch MacBook Pro has a Metal score of 20581, and the Radeon Pro 5600M, which was the highest-end GPU option for the prior Intel-based 16-inch model, has a Metal score of 42510.

Compared to the fastest chip available in Apple's previous-generation 16-inch MacBook Pro, the ‌M1 Max‌ is 62 percent faster, and it's 3x faster than the ‌M1‌ chip in the 13-inch MacBook Pro, based on the Metal score we have so far.

It's not clear if this ‌M1 Max‌ chip is the 24-core variant or the 32-core variant. This is also just one result, so we should be able to get a better picture of the graphics performance when additional benchmarks are available.

According to Apple, the 32-core GPU in the ‌M1 Max‌ is up to 4x faster than the ‌M1‌. Apple has said that the chip delivers performance "comparable to a high-end GPU in a compact pro PC laptop" while consuming up to 40 percent less power.

The chip has the highest single-core score of any Mac to date, and it is only beaten in multi-core performance by the 16, 18, 24, and 28-core Intel Xeon chips used in the higher-end iMac Pro and Mac Pro models.

priamXus
This + Their best cloth ever made will be the killing combo !
Score: 25 Votes (Like | Disagree)

Im returning it. Will keep my iCloth.
Score: 17 Votes (Like | Disagree)

Hjupter Cerrud
I hope this is not the 32-core gpu otherwise this would be a bit disappointing :(