Bonhams today announced that it will be auctioning several rare prototype Apple devices on November 3, including an unreleased VideoPad. 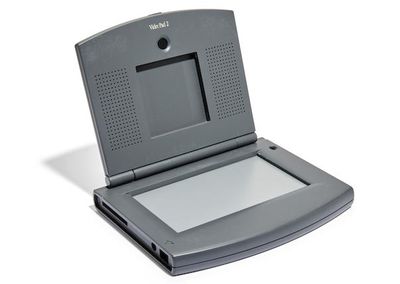 The VideoPad was intended to be a personal digital assistant (PDA) device similar to Apple's Newton MessagePad series, with Apple testing three versions of the device between 1993 and 1995, including the VideoPad 1, VideoPad 2, and VideoPad 3, according to Bonhams. The auction company says the VideoPad 2 headed to auction is the only surviving concept prototype, and it is estimated to fetch up to $12,000.

The three VideoPad prototypes were based on a conceptual design sketch drawn by Apple's former CEO John Sculley, but the devices were ultimately scrapped by Steve Jobs upon his return to Apple in the late 1990s, according to Bonhams.

The prototype VideoPad 2 features a hinged flip-top design with two screens, although the top screen appears to be missing. The device was apparently going to have a built-in camera for video conferencing, two speakers, a memory card slot, a power socket, and a phone line input, but it was ultimately never released to the public.

The prototype was purchased from an Apple engineer in Palo Alto in 1999, and it comes in its original black leather carrying case with the Newton logo, according to Bonhams. More details are available on the auction website.

AngerDanger
I love that even a rejected mid-nineties Apple product had a camera bump.

Its amazing to think that the culmination of ideas that were to become the ipad were in development for almost 2 decades before its release.

Also Job's was quite courageous in ditching entire lines of prototyping because they were not good enough.

Killing off anything Newton related wasn't courage, it was killing off a product that was important to John Sculley.
Score: 8 Votes (Like | Disagree)

zvolts
“The device was apparently going to have a built-in camera for video conferencing, two speakers, a memory card slot, a power socket, and a phone line input”

Video conferencing over a POTS line and with 1990s technology. It’s no wonder Jobs killed it.
Score: 6 Votes (Like | Disagree)

Not really. Look at the screen below: the notch is already included. :-D

Since that was back then, the memory card was probably an SRAM card. Those were brutally expensive. I still have a couple of them around, for my PIC-1000s(!).

I can just imagine sitting there waiting for the modem to connect before starting my video call. Why would I want to do that at one FPM (frame per minute) when I could just pick up the phone and call the person?

The same reason people fly to meetings instead of call.

We’re spoiled now, but imagine being able to see your mother in California when you were at college in New York back in the 1980s or 1990s.
Score: 4 Votes (Like | Disagree)
Read All Comments