Tile, a company that makes Bluetooth-based item trackers that compete with Apple's AirTags, today introduced a refreshed lineup of devices and new features that make it easier for users to locate lost items. 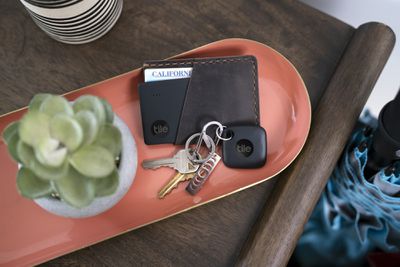 The Tile Pro, Tile's most robust tracker with a 400 foot Bluetooth range, has been updated with a new key fob look. Tile says that the Pro is designed to attach to keys right out of the box, and that with the included keychain, it can also be used with bags and purses.

Tile's Mate, Sticker, and Slim trackers have all been refreshed and now have a 250 foot Bluetooth range, a louder ring, and upgraded IP67 water-resistance. The Mate has also received a design update and it now features a three-year battery life.

For locating lost devices, Tile is updating its "Lost and Found" network with support for QR codes that will be included on the back of every item tracker. If a lost item with a Tile tracker is found, the person who found it can scan the QR code to get contact details for the owner. All of Tile's refreshed trackers include the QR code with the exception of the Sticker.

Apple has a similar system that allows a lost AirTag to be identified by someone who finds it, but Apple's solution uses NFC functionality. A lost AirTag can be scanned by an NFC-enabled smartphone to bring up details.

To address unwanted tracking, Tile is introducing a "Scan and Secure" feature is designed to let anyone with the Tile app scan for and detect nearby Tile devices and determine if an unknown device is near them. Scan and Secure is coming to Android and iOS users in early 2022.

When paired with iPhones with a U1 chip, ‌AirTags‌ will enter into a Precision Finding mode when close to a lost device. Tile Ultra will work in the same general way with visual finding, and it will be compatible with both iPhones and Android smartphones.

Tile's new Tile Pro, Mate, Slim, and Sticker are priced starting at $24.99 and can be purchased from the Tile website or from sites like Amazon.

For something that's going to never happen, my family sure has a lot of them. Appreciate the louder alerts, not having to buy a case just to attach them to something, and various v1.0 kinks of the Airtags.
Score: 11 Votes (Like | Disagree)

NogbadTheBad
Too little too late.

People have moved on, Airtags have a way bigger finder userbase.
Score: 9 Votes (Like | Disagree)

WiseAJ
Oh look competition forced Tile to get somewhat off their lazy butts and somewhat improve their product. Imagine that.
Score: 7 Votes (Like | Disagree)

jvchappy
Too little too late. I had tile devices. I lost my keys with a tile attached. The person that found them had zero way to contact me. It took me weeks to get my keys back.

They could have printed SNs on the back and had a site to allow people to contact the owner years ago, but they only did it because apple developed a better product.

I'm glad they're finally starting to catch up, but they should have innovated instead of screaming "monopoly" to anyone that would listen.
Score: 7 Votes (Like | Disagree)

Take Flight
Are they too stubborn to make their devices FindMy compatible so they can actually be nearly feature parity with AirTags?
Score: 6 Votes (Like | Disagree)
Read All Comments

Sunday October 2, 2022 6:41 am PDT by Joe Rossignol
Apple is developing new iPad Pro, Mac, and Apple TV models, and at least some of these products will be released in October, according to Bloomberg's Mark Gurman. However, Gurman continues to believe that Apple is unlikely to hold an event this month. In the latest edition of his Power On newsletter, Gurman said "the big iPhone 14 unveiling last month was probably it for Apple in 2022 in...
Read Full Article • 179 comments