Apple this month started including 7-day complimentary AppleCare+ coverage with new products purchased through its stores in Australia, including any new Mac, iPhone, iPad, Apple Watch, Apple TV, AirPods, HomePod mini, and more. The complimentary coverage is automatically included with the purchase of a qualifying new Apple product. 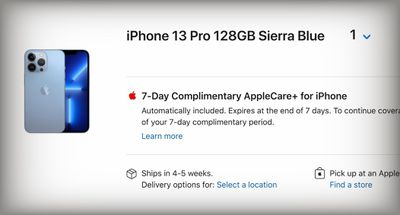 The addition was brought to our attention today by MacRumors reader Jack Jacobs, but based on recent updates to the AppleCare+ terms and conditions in Australia, it appears the change was implemented last week, on September 30.

It's unclear why Apple implemented this change, but it could relate to strong warranty protections under Australian Consumer Law. The complimentary AppleCare+ coverage is not available in the United States or other countries that we checked.

Update: The change in policy is due to new requirements for add-on insurance like AppleCare+ in Australia. Under the new regulations, there is a mandatory four-day pause between the sale of a product and any add-on insurance for that product, so Apple is providing seven days of free AppleCare+ coverage to span that gap.

The regulations apply across a broad range of product categories and are intended to help protect customers against high-pressure sales and poor-value insurance products frequently offered at the time of product purchase.

Though it could have been for 30 days.

It's about as useful as a fart in your face.

Consumer laws need to catch up in many parts of the world (including the US).

7 days only, why not a whole year of complimentary Apple Care

Edit: removed a quote from @tobefirst that I misread.
Score: 10 Votes (Like | Disagree)

tobefirst ⚽️
That's pretty cool. Every year there's a thread from someone who dropped their phone the minute they took it out of the box. This will take a bit of the sting out of that.
Score: 5 Votes (Like | Disagree)

I can’t believe we got this far without anyone mentioning the whole ACL/statutory warranties which go for two years anyway which make extended warranty type products (or insurance like products - the distinction often blurs due to commonality in feature sets) an even worse value proposition.

After HP, Apple and another large tech companies were all pulled up on failing to comply with Australian statutory warranty law, underwhich products must be covered for the "period reasonably be expected to last after purchase".

This is determined by a number of factors, but in Apples case iPhones were usually sold on 2 year contracts at a very high price and thus the owner would expect the product, given its price and "quality" touted by Apple, to be covered from faults for that time.

This also extends across to laptops and other devices; HP were fined $3M and even made to place advertisements explaining that they now understand consumer law in Australia and that in fact advertising a "1 Year Warranty" on all products is illegal.

A cheap $300 plastic laptop, sure, you wouldn't expect massive durability there unless advertised as such.

$5000 MacBook Pro? You bet a consumer expects that to last a couple of years - and the ACL protects the consumer being told to pay for repairs by the manufacturer if product fails before a reasonable time. That being at least 2 years on Apple gear, but that is not a limit and in fact is illegal to advertise as such.

With these protections in place, AppleCare+ actually really just offers protections Australian consumers inherit already from the consumer protection laws. Thus, its a bit of a scam to tell customers to buy it to gain those protections under insurance as well.

The only good thing about AppleCare+ is accidental breakage (which would be cheaper to repair by third parties if Apple didn't void warranty anyway) and customer support - which you can get in a Genius Bar anyway.
Score: 4 Votes (Like | Disagree)

beanbaguk
It's about as useful as a fart in your face.

Consumer laws need to catch up in many parts of the world (including the US).
Score: 4 Votes (Like | Disagree)

There is nothing self-entitled about it. In fact, it is very obtuse to believe that.

If it weren't for consumer laws, companies like Apple would constantly put two fingers up at you and deny you any right to repair.

Citing your examples, they are all a bit naive. In all cases, you have demonstrated examples of consumer negligence and this isn't what consumer protection is about.

But, having said all that. In the instance of the car; This is why you have insurance. On new cars, you must also have fully comprehensive insurance. With regards to the television, this is clear negligence on the part of the consumer, however, in most cases, insurance will once again cover this level of damage, or part of it.
Score: 4 Votes (Like | Disagree)

ACCC would have enforced that upon . Australia is the nanny country when it comes to regulation. I'm sure we (consumers) pay for it as Apple will factor this bureaucracy into the sale price - thanks Canberra!

Yes it'll ultimately be borne by the customer (although some might say it's just out of Apple's healthy margins which can wear these consumer protection costs) but in all honesty, after living abroad in other countries with varying degrees of consumer protection, I really do appreciate the proactivity and effectiveness of the ACCC and consumer law protections. Goods not being of merchantable quality or fit for purpose sounds like an obvious case for a refund, but you compare it to other NFP consumer protection organisations in other countries, and they're proud to even get a 50% refund in store credit for similar matters.
Score: 4 Votes (Like | Disagree)
Read All Comments

Saturday February 4, 2023 10:05 am PST by Eric Slivka
Online retailer TigerDirect has slashed pricing on the M1 iPad Air in several colors, offering the base 64GB configuration for just $313.99 in Purple and Pink. Note: MacRumors is an affiliate partner with TigerDirect. When you click a link and make a purchase, we may receive a small payment, which helps us keep the site running. That's a savings of 48% compared to Apple's normal $599.00...
Read Full Article • 485 comments

Sunday February 5, 2023 6:06 am PST by Hartley Charlton
A new version of the Mac Studio with the "M2 Ultra" chip is unlikely to arrive in the near future, according to Bloomberg's Mark Gurman. In the latest edition of his "Power On" newsletter, Gurman explained that since the upcoming Apple silicon Mac Pro is "very similar in functionality to the Mac Studio," Apple may wait until the release of M3- or M4-series chips to update the machine, or...
Read Full Article • 423 comments

Saturday February 4, 2023 1:30 am PST by Hartley Charlton
Google's Chromium developers are working on an experimental web browser for iOS that would break Apple's browser engine restrictions, The Register reports. The experimental browser, which is being actively pursued by developers, uses Google's Blink engine. Yet if Google attempted to release it on the App Store, it would not pass Apple's App Review process. Apple's App Store rules dictate...
Read Full Article • 286 comments