Facebook today launched its first smart glasses, which were created in collaboration with Ray-Ban. The Ray-Ban Stories are priced starting at $299 and come in 20 style combinations. 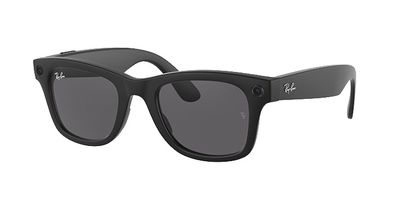 Smart glasses might suggest augmented reality capabilities, but Facebook's Ray-Ban Stories are similar to other connected sunglasses on the market and are limited to making phone calls, snapping photos, and listening to music.

The Ray-Ban Stories are equipped with a set of 5-megapixel cameras built into each side of the frame, which can record photos and 30-second videos using a button or hands-free with the Facebook Assistant.

There's a hard-wired LED light that comes on whenever you're taking a photo or a video so other people aren't caught unaware.

For listening to music, the Ray-Ban Stories have open-ear speakers, and there's a three microphone array for calls. The Ray-Ban Stories have a built-in battery that lasts for up to six hours and a portable charging case, which Facebook claims will provide up to three consecutive days of glasses use, but some reviewers have said that the battery drains quickly if the glasses aren't turned off while not in use.

Today we’re excited to launch @ray_ban Stories built with @Luxottica: Smart glasses that let you capture photos and video, share your adventures, and listen to music or take phone calls — so you can stay present with the world around you. // https://t.co/bwwTXaM9WI pic.twitter.com/TnV0Vb60RW — Tech@Facebook (@techatfacebook) September 9, 2021

The Ray-Ban Stories come in several iconic Ray-Ban styles like Wayfarer, and there are five color options. Lenses include clear, sun, transition, and prescription. There is no Facebook branding on the glasses as the design and distribution has been handled by Ray-Ban parent company Luxottica with Facebook providing internals.

Those interested in purchasing a set of Facebook's Ray-Ban Stories can do so from the Ray-Ban website starting today. The Ray-Ban Stories are also available in some retail stores in the United States, Australia, Canada, Ireland, and the UK.

dannyyankou
Well I guess it’s about time for me to retire my Ray-Ban’s, they sold their soul
Score: 28 Votes (Like | Disagree)

TracerAnalog
I’m not concerned at all about any privacy aspects, or that these glasses will monitor how long you look at something, or someone, or … Nope, not concerned AT ALL.
:eek:
Score: 25 Votes (Like | Disagree)
Read All Comments